“I believe, Messieurs, in loyalty—to one’s friends and one’s family and one’s caste.”
-Agatha Christie, Murder on the Orient Express

A murder mystery is only as entertaining as its suspects and detective allow it to be. The writer can hang whatever necessary plot threads or add any social commentary they want if they have a cast that’s compelling to follow. This is something Agatha Christie understood in her Hercule Poirot mystery books, and it’s what Rian Johnson understands in his Agatha Christie tribute, Knives Out.

Set at the estate of famed mystery writer Harlan Thrombey (Christopher Plummer), Knives Out uses the familiar murder mystery blueprint of a gifted detective (in this case, Daniel Craig’s Benoit Blanc) investigating the murder of an important man (in this case, the aforementioned Thrombey) in a luxurious location.

How Knives Out unfolds its plot, however, is where the true beauty of the film shines. Ever since his debut feature film Brick, Johnson has displayed great glee in twisting and turning the conventions of genre. Whether it’s setting the hard-boiled story of Brick in a high school, imagining the exciting and horrifying ways time travel can be used in Looper, or setting an episode of the breakneck-paced Breaking Bad in one room, Johnson is someone who always knows what his audience expects, and always tries to stay one step ahead. While he may not always be successful (count me in the camp disappointed by The Last Jedi), he is someone who has always shown confidence in his vision and in his craft. 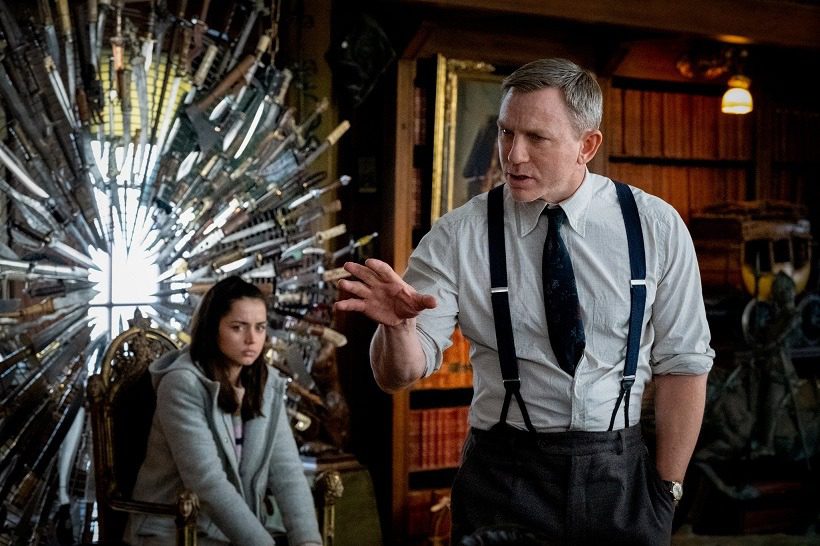 And nowhere has he ever been more confident than in Knives Out. It’s truly an exciting thing when a mystery film manages to be this thrilling, this intelligent, and best of all, this funny. To discuss too much of its plot would be to ruin what makes the film such a delight, so we’ll keep focus on Johnson’s cast. What a delightfully spoiled rotten bunch they are! From Jamie Lee Curtis’ strict, icily witty Linda, to Michael Shannon’s insecure and angry Walt, to Toni Collette as the hippy daughter-in-law obsessed her image of “wokeness,” to Don Johnson as the loudmouth brother-in-law every family member has (you know the one), the cast of Knives Out is cartoonish yet also strangely human. When Benoit Blanc says, “Hell, any of them could have done it,” we believe him.

And Daniel Craig is an absolute charmer as Blanc. Playing him with a ridiculous Cajun accent (in the vein of the ridiculous French accents adopted by Poirot’s many actors), Craig imbues Blanc with a dry sense of humor, arrogance, a hint of elitism, but also a tenderness underneath it all. Of all his gifts as a detective, his most helpful is undoubtedly his judgment of character. Which leads to the other stand-outs of Ana de Armas and Chris Evans. As Marta, de Armas plays someone who is seemingly one of the few unambiguously kindhearted characters in the film. But her shifty eyes, nervous demeanor, and avoidance of answering direct questions hint at something beneath the surface. And Chris Evans as Ransom, Thrombey’s grandson, gets to cut loose and play an insufferable douche bag. It’s a hilarious performance from Evans, but a multilayered one as well. Ransom may be a spoiled brat, but he’s also thoughtful and capable of lending a sympathetic ear. More than anyone else in the family, he is aware of how deeply narcissistic and damaged the Thrombey clan is.

Have you seen this:
The Mandalorian Season 2 Finale "The Rescue" (Review)

If there’s a flaw in the film, it’s the on-the-nose political commentary. Make no mistake: this is a movie well aware of what it means to be a movie in 2019. It’s a film that wears its political heart on its sleeve, and while its heart is noble, it’s nonetheless something that weighs down the otherwise rapid fire pace. One exception is a blackly hilarious and awkward dinner party conversation that all too many families will have this Thanksgiving.

Knives Out is a film that absolutely delighted me precisely because it outsmarted me. Better yet, it outsmarted me without contradicting itself or lying to the audience, a rare feat in a mystery film. Johnson stated that if this film is a success, he may continue telling stories about Benoit Blanc. He can count me as someone who will be first in line to purchase a ticket.

Knives Out
Did you miss breaking news?We publish new content every day.