2018 will mark the 20th anniversary of LACUNA COIL’s debut on the metal scene. To commemorate this special occasion, the iconic Gothic metal outfit are announcing a very special show. 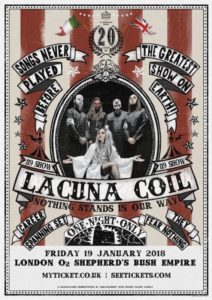 Tickets are available now via the band’s website: http://lacunacoil.com/

The one night only show promises to be a unique extravaganza, with the band putting on a career-spanning set that will include songs they have never played before live. The event will also be filmed and recorded for a release later in 2018.

Speaking about what fans can look forward to at this one night only event, the band comments:

“We are very excited to celebrate our twentieth anniversary with an exclusive live show on January 19th in London! London is a very special city for us. It welcomed us with open arms when we started 20 years ago and we feel it’s the perfect place to invite our fans from all over the world to celebrate with us. As for what will happen…that’s a surprise. You’ll have to come and see for yourselves!”

LACUNA COIL are currently on tour in North America as part of the “Ultimate Principle” Tour w/ Epica, Insomnium, and Elantris. A complete list of remaining dates can be found below.