The creative team behind Lazarus has built a deep and intertwined plot to their series. The wealth of the world is controlled by a small handful of sixteen families and these families each have a champion that embodies the technology and martial power. These champions are known as the Lazarus. In the Carlyle family, their Lazarus is named Forever. Forever is a clone of a clone of a clone of a clone…etc. She is the seventh version of the Carlyle Champion.

The plot to Lazarus is dense and complex; this isn’t a series that you can just jump into in the middle of a story arc and enjoy, you need clearly defined points of entry into the series and Lazarus: Risen #1 is just that. It is the perfect entry point for newcomers. The comic is front-loaded with a summary of previous events, a character page that describes who is who and how all these characters connect. Trust me, you’ll need it; I don’t say that in a condescending way, it’s just a necessary tool to have at your disposal as you begin your journey into the tale that Rucka and team are weaving here.

This issue hits the ground running and doesn’t let up for the first two dozen pages or so, as we watch the Carlyle family re-establish their dominance amongst the families. In a scene that puts the hostile in hostile takeover Forever and a group of her mercs puts down an attempted coup by one of the lesser families. There is a flurry of activity in this opening sequence that reads more like a scene out of a Tom Clancy novel or a first-person shooter where you watch a squad of gun-toting warriors takes down enemy forces with clean, laser-like precision.

READ THIS
"Ruins of Ravencroft" Series Comes To Marvel in January

The remainder of the issue takes on a feel that is more akin to a medieval tale of political intrigue that would seem right at home in an episode of Game of Thrones. The political maneuvers that take place behind the scenes, the backstabbing, the family secrets; all are almost too juicy to resist. Once you begin this installment of Lazarus you will not be able to stop from getting immersed in the series.

The story itself is excellent; which is to be expected from long-time scribe Greg Rucka. The story is so on point that it doesn’t seem fair that this series hasn’t found its way into other media outlets, as the opening scene in this installment was on par or better than most action shows out today. There are no weaknesses in Rucka’s game. The dialogue is tight, the pacing is excellent, the mood is ever-changing, but the comic reads like lightning once you start. New readers may not be informed of all the details of this comic as they begin to read, but the tapestry that Rucka is weaving is mesmerizing all the same.

Michael Lark and Tyler Boss put forth their best in this comic. Lark has the style and talent that visually harkens to contemporary peers like Steve Epting and Lee Weeks, where the work is heavy on the inking, but utilized in a way that is captivating to the eye, yet bold enough to maintain the violent and dark mood of the book. I tried to find fault but there wasn’t a single major flaw to be found. –Kudos to the art team.

As for the coloring and lettering; I did spot a couple of minor hiccups in the coloring, but that was under heavy scrutiny, and ultimately didn’t affect the score of the book or my enjoyment. The lettering was well placed and balanced that it didn’t detract from the flow of the issue; although it does seem like a crime to cover up any of Lark’s work here.

My one gripe about this comic is the price point. It retails at $7.99 (U.S.) But the book clocks in at well over 60 pages. So, in the long run, it’s not over-charging the reader once you take into account the sheer amount of content that is packaged here. Still, I think this might be another bar to entry for new readers who might not know that they are getting their money’s worth. 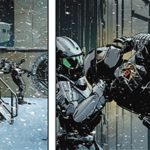