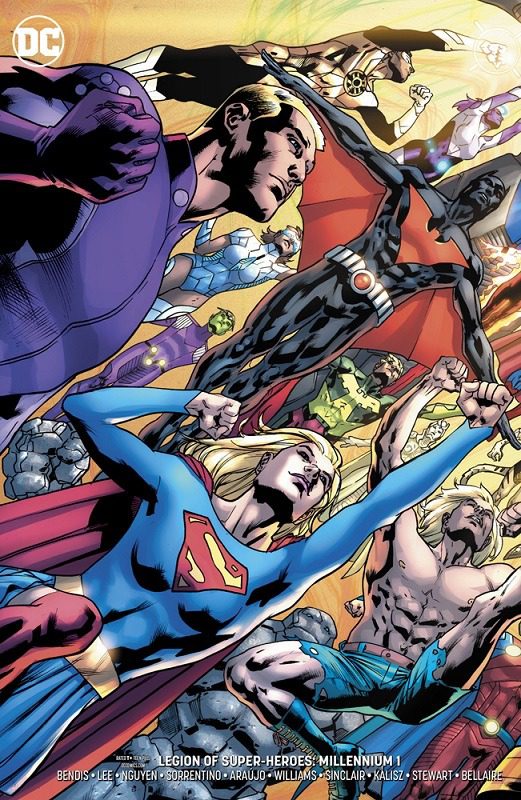 I’ve never read a Legion of Super-Heroes comic. Not in the 26 years that I have been a comic fan. The LSH has always been that series that seems to daunting even for a veteran reader like myself to venture into. The series is too steeped in DC history, too many characters, too far in the future… it just never appealed to me. So when I started this issue I wasn’t sure what to expect as a newcomer. I was worried that I would be lost within the first few pages and that I would have to try again in another two decades. What I found in this issue was a tragic tale of a character I have only had passing interactions with in other comics. The red headed Rose and Thorn.

With what little knowledge I have of the Legion I wasn’t expecting this tale at all and it was a delightful introduction not only to a character I knew little about but a great gateway into some of DC’s lush history; as this series makes multiple stops throughout. We see Rose in the far future talking to Madame President Super Girl, I’m going to assume in the normal Legion timeline, then we get flashbacks to Batman Beyond and Kamandi.

Bendis has done something here that I didn’t know was possible as he made Rose a very compelling character. She has discovered that somewhere during the adventures of her other personality, the persona known as Thorn, she has stopped aging. Rose can not remember what happens when she is in the Thorn personality, so she is at the mercy of trying to solve her own mystery. A mystery that spans from current day DC to the far future of the Legion.

While the ties that Rose might have to the legion are unclear to me, (This all might make sense to a more seasoned fan) I am still fascinated by where Bendis is going. Is Rose going to be an ageless villain for the legion to fight? Is she going to become the narrator that introduces us to the latest version of the legion as she becomes a member? Where all this is leading has yet to be revealed, but the puzzle is a compelling one so far.

The art on this book is top tier. Just glancing at the credits lets you know that DC is going all in on relaunching this series as a major release. There are no weak spots in the art, inks, colors, lettering. This is a joy to look at. While the artistic style may differ, each change in art signifies a shift in time. Each creative team telling their own small tale and then moving on, yet the book blends together flawlessly.

I may not be a legion fan but I know a good comic when I read one and this issue falls firmly in that category. If this is a taste of what is on the horizon I think we all might be reading a lot more Legion of Super-Heroes in the future.