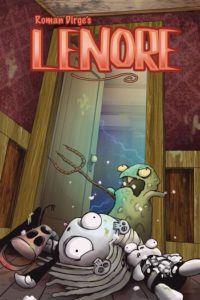 Lenore in The Time War Part One

I’ve been a fan of Lenore for quite some time now, ever since I saw Lenore #10 way back in the day and thought, hey, this looks cool. I sealed my fate that day. Now I search for the bound volumes of the insane world created by Roman Dirge. I’ve only found four in my local comic shops. But I am far from over! I am kicking myself for somehow missing the fact that Lenore is back! I’ve missed a whole Pickle Hat debacle as well as two volumes. The search, I swear continues, but until then, lemme tell you all about the impending Time War… wait, I’ve heard that before. Doctor Who, anyone? Oh, and instead of Time Lords, they are Time Goats.

The art remains amazingly bizarre as it always has been. Mister Dirge hasn’t lost his unique style of art, coloring, or writing. Everything remains as twisted and gorgeous as it has been, which makes me smile so much, I think I cracked my jaw. Lenore started out as a few comic strips, but it soon turned into bigger story lines, and this newest comic is of no exception. Setting up, again, a Time War, where after eating, er, something (no spoilers) the trio of Lenore, Pooty the Bounty Hunter, and Ragamuffin are transported throughout time. Where? I WON’T TELL YOU! STOP ASKING! But you can find out for yourself if you pick up this wonderfully bizarre comic.

Have you seen this:
Masters of the Universe: Revelation # 1

Damn, I missed Lenore. I’m so glad she’s back!