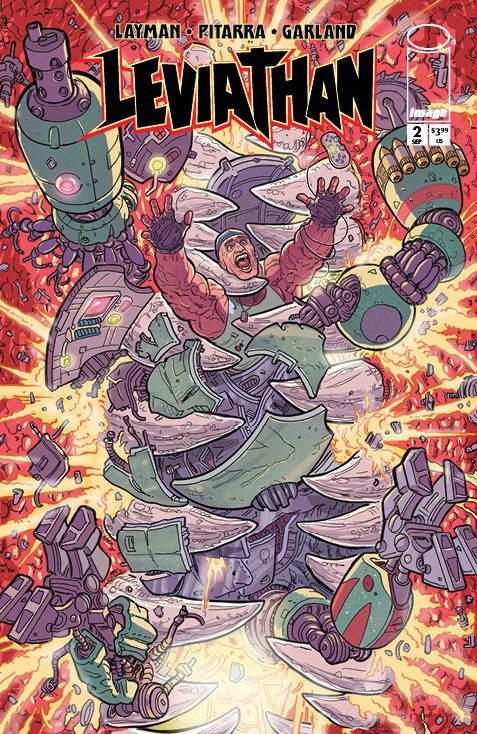 With the recent theatrical releases of movies like Rampage, Godzilla, and Kong: Skull Island there has been a revival of the giant monster movie genre. So it shouldn’t be a surprise that comics follow that trend and offer up some good old massive monster magic; enter Leviathan.

Ryan Deluca is your average pop culture nerd, he was just living his life, preparing to purpose to his girlfriend Vee, and then BOOM! The whole world is turned upside down by the arrival of a massive mutant dinosaur. Isn’t that just the luck?

In this issue, Ryan is informed that Vee is in a coma and that she is considered brain dead. Meanwhile, as he tries to gather up what’s left of his life he comes face to razor-sharp-teeth with another flood of dinosaurs. These prehistoric invaders are slaughtered in the street by the military; who have herded the beast up to the surface in an effort to show the world what happens when you dick with the powers that be.

Layman is working overtime on this issue. He is the mad scientist behind the scenes that is concocting this tale. As a kid that grew up on cheesy monster movies and watched way too much Mystery Science Theater 3000 I loved every page of this wild and zany book. From the over-the-top violence of the military to the ridiculous reveal of a three-headed mutant dino-monster this was cheesy goodness from start to finish. This is not a comic that should ever be taken seriously by its readers; that’s not the point of a comic like this, it’s a joyride into the wilds of imagination and Layman takes us all there in style.

Speaking of Style, the art on this comic is fantastic. The images provided by Nick Pitarra and the colors done by Michael Garland are vibrant and jump off the page. This is the perfect marriage to the insane material that is being covered. While the dinosaurs are visually thrilling, there is enough artist flare to not make the reader feel like they are trapped in a Jurassic Park knockoff. Piterra makes these bad boys his own, and that’s not even mentioning the hyper-detailed additions to each panel. Piterra’s style is very unique and somehow I don’t think any other artist would have had the same success with this script. It’s a perfect match.

In today’s overly political world it’s a breath of fresh air to pick up a comic like this and just lose yourself in the story–Even if that story is one filled with giant mutant dinosaurs fighting army men in Mech suits.