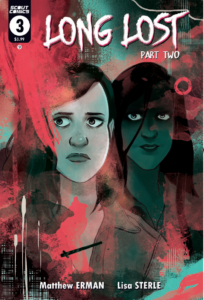 Long Lost Book 2 Issue 3 picks up with Piper walking with her previously missing Mother in what appears to be a realm outside of the main Hazel Patch. The relationship between this mother-daughter pair is complicated, to say the least. Throughout the previous iterations of Long Lost, there is always an eery calm during what should be emotionally charged and stressful situations. This is no different. Piper’s mother who previously had disappeared from a mental hospital leaving her two young daughters feels like a ghost and Piper seems most aware of it. She does cry in anger or sadness during her reunion. Her reaction, or lack thereof, adds to the creepy and unsettling feeling that permeates the series. This issue gives more clues to the true nature of this complicated family’s history as well as the disturbing truth that lies in Hazel Patch.

Erman and Sterle are able to craft and slowly unravel a thrilling psychologically charged story that delves beautifully into the darkness of “long lost” family relations. My favorite part of these books continues to be the relationships between the girls and their mother. Previously, that relationship was very one-sided but now seeing Piper and Frances’ mother we are able to piece together more aspects of the narrative.

This issue heavily uses muted colors to iterate a change in mood. While the book is still in gray-scale throughout the pages there are light undertones of purple or green in that gray. I also have to commend Sterle for her lettering. There are particular panels where the lettering feels like dark shadows or runs through blood and it is very well done and thought out.

While the lettering might be wonky, I continue to love this story and it feels immensely special. There is clearly a lot of passion in this comic and I look forward to seeing how the story continues to play out. Currently, Long Lost Book 2 Issue 3 is slated to come out later in October with no exact date set as of this review.