The third episode of Luke Cage’s sophomore season continues the pacing pattern established with its preceding installments. While some viewers may consider Luke Cage’s pacing slow or drawn out, I am far more inclined to consider it a slow burn, likened to some of the tremendous soul ensnaring Jazz music that provides much of the background ambiance. A purposeful, deliberate, gradual build, taking the viewer on a rich and elaborately developed story, popping with intermittent jolts of intense eclectic action. Luke Cage’s writers unquestionably utilize their immensely diverse and talented cast to the fullest extent, capitalizing on their powerful dramatic acting ability and the incredible chemistry that stretches cast wide, weaving beautify tapestries of the story for each character that graces the screen. That’s not to say there isn’t action, quite the contrary, the fight scenes we see are intense, smartly choreographed and show the styles and powers of the combatants with precision. However, if you’re looking for action at the level of Daredevil or the Punisher, then you might find yourself craving more.

Throughout this episode, we see Luke battle an opponent that he is unfamiliar with how to fight, himself. Sub coming to anger that rivals his strength, Cage and his 12 rounds with his personal demons and I conquered issues takes our bulletproof hero into an entirely different arena. Claire (Dawson) gets to show off her acting chops, proving that Marvel was insanely lucky to hit the gold mine of having Rosario Dawson be the common character that began linking all of the Netflix shows together. Meanwhile, Misty Knight (Missick) works through her pent-up emotions surrounding the loss of her arm in an extremely Misty Knight fashion. It’s incredibly enthralling to watch Missick work, the complex layers of emotion her character works through with the smallest gesture is truly a masterclass level performance. It is Mike Colter’s Luke Cage however that undergoes the largest transformation throughout the season’s third episode, delving into parts of his personality that few have seen, and neither he nor Claire are comfortable with. Colter has portrayed Cage incredibly since his introduction in Jessica Jones, but the range he goes through in 2×03 is the most dynamic he’s been thus far, an exposed nerve, just raw, unfiltered and unrefined.

Every time it is ever mentioned that comic books are modern day Greek myths, this episode is the perfect example of that portrayal. Yes, there is heroes and villains, battles and action, but at the core, truly the core of every great story regardless of the medium is emotion. An emotion that is so pure, so powerful, that it can cripple even the physically strongest hero. It is that emotion that serves as the point of every word, action, and thought that the hero and everyone they interact with prior to that emotion’s surfacing, and it is that emotion the drives every word, action, and thought that follows. Delivering that through acting, to the point where the most entrancing part of a superhero show episode is not when Luke Cage battles a street gang, but rather a conversation between two people in their home. That is powerful acting, the cast and crew of Luke Cage should be incredibly proud of themselves. 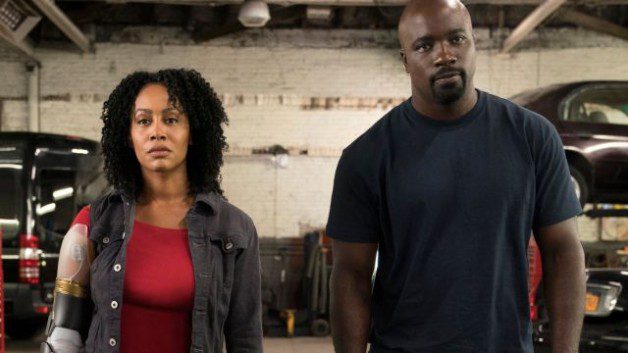 Episode 4 “I Get Physical”

With the third episode testing Luke at an emotional level he’s never experienced before. The fourth gives Cage a physical for to the likes he’s never seen, the brilliantly portrayed Bushmaster. The enigmatic Jamaican boogeyman is enough to make you say ‘Sweet Christmas’ and have to throw a handful of dollars into Pops’ Swear Jar. In addition to Mustangs Shakir’s Bushmaster delivering a powerful new addition to the cast, we’re also treated to an equally intriguing character and powerful performance by Gabrielle Dennis’ Tilda. Tilda is shrouded in mystery, both of her full backstory and her intentions, and the fantastic delivery by Dennis is absolutely outstanding. To stand up and steal scenes from Colter and Woodard is a testament to her screen presence.

While Luke Cage finds himself down and out for once, bested in combat and just as confused by it as he is wounded. Misty Knight finds herself with an arm up on her previous situation thanks to some friends in high places. Giving her, and even more so the fans, a glimpse into a very special comic nod that we’ve been waiting for since season one. In addition to Knight’s upgrade, we also are given insight into some of Bushmaster’s background and his motivation throughout the season thus far.

One of the things I enjoy the most about both of Luke Cage’s seasons is the music that serves as both the backdrop and the blood flowing throughout the show. A beautiful eclectic blend of hip-hop, blues, and jazz, a melodic melting pot pouring from headphones and the stage of Harlem’s Paradise alike. The music brings the incredible acting, the powerful action, and the gorgeous cinematography to an even richer level. As the first third of season 2 concludes, the game has been set, a myriad of chess boards intermingling with one another. Heroes against villains against police against other villains, a perfectly complimentary ensemble cast, a powerhouse creative crew, and rich saturating beautiful imagery created through color and sound. As we step forward into the middle third and beyond I am incredibly excited to see how the story continues to evolve and unfold.