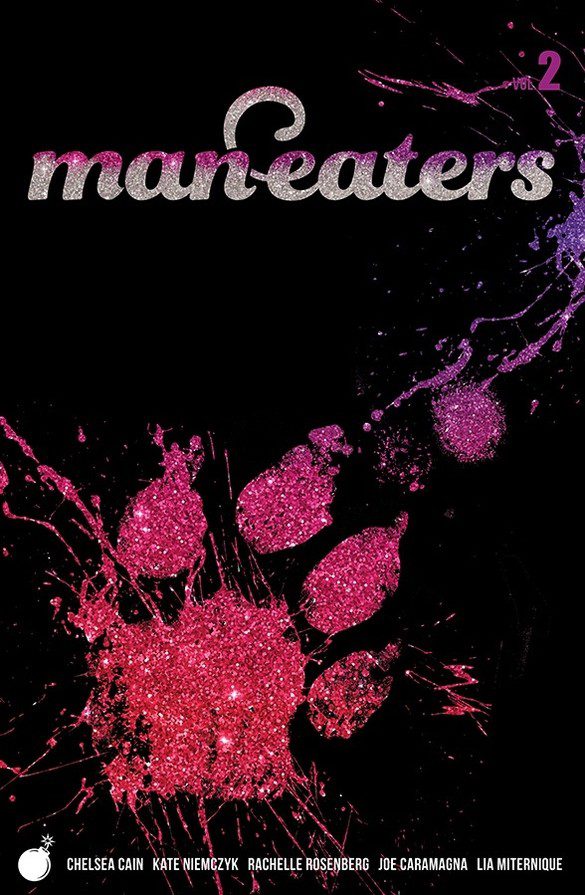 OK, first things first, I am not the target audience for this series. I’m a middle-aged man pushing 40 and a series about the struggles and tribulations of teenage girls is not exactly in my wheelhouse. That being said, I am the target audience when it comes to smart, well-crafted comics, and this series fits that billing to a tee. In the Image title Man-Eaters, a girl getting her period is the end of the world, well not the end of the world, but possibly the transformation into a were-panther.

This series is smart, and I mean next level smart. There are levels to the humor and the drama that Chelsea Cain provides that readers might not pick up on in the first reading. There is also so much additional bonus material packed into these comics that it makes me wonder why other publishers aren’t adding these kinds of D.I.Y. projects in their books…card games, cut out masks, how to manuals…this is ingenuity that the rest of the comic industry should be cashing in on.

Alright, let me back up here for a second, this series works off of the premise that if a teenage girl gets her period that it’s a sign that she is infected with a disease that will turn her into a half panther- half werewolf-like creature that feeds on humans. The government has put estrogen in the tap water, and each girl is closely monitored during her adolescences, to guarantee that this event never takes place.

Enter Maude and her group of ragtag friends who have no interest in conforming to these crazy ideas. It’s not long before a were-panther attack takes place and the mystery of who-did-it begins. Now if that sounds bonkers, just imagine these creators pouring in enough social commentary to match the drama and humor in each issue. From mock full-page ads promoting fake products like Estro-Lite, the flavored powder mix you put into your estrogen water, to Ruminations, the Pantherism recovery clinic for girls.

These creators use modern marketing and humor to raise some serious social concerns. For example the list of school rules for boys and girls. The boys have two rules to follow; no running in the halls and no fighting, meanwhile the girls have a laundry list of rules to comply with, from the way they dress to the way they groom, and on and on. Equality of the sexes it is not.

The artwork provided by Niemczyk is top notch and fits the title like a glove. This is an artist on the rise that can play up the visual jokes and yet keep the drama set perfectly on the page… Plus who doesn’t have the respect of the comic community for being able to illustrate a walking tampon in Wonder Woman boots?

Go back to the beginning of these series if you’re just joining in and catch up. This series is going to be around for a good long time.

Image Man Eaters
Add your voice!Join the conversation on Discord...
Join Our Discord