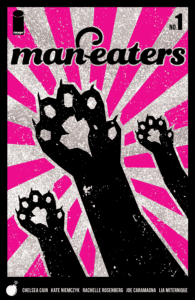 I read Chelsea Cain’s Man Eaters #1 while sitting next to my own cat. In the comic, girls are being turned into cats, similar to a werewolf, during their period thanks to a mutated parasite found in cat poop. Anyone who has cleaned a litter box or even touched a cat is in danger of the change. There are scientific studies that have found multiple dangers hidden in cat poop including its ability to slowly make people insane. I suppose there is a logical reason why women like myself are known as “crazy cat ladies.” Man Eaters takes this science and runs with it.

It is clear this story is a metaphor for something greater than just a cat story. It is a werewolf tale meets Handmaiden’s Tale. This comic is proudly showing Cain’s feminist agenda and I love it for that reason. The book is chock full of symbolism and easter eggs from Image Comic’s other well known feminist comics such as Bitch Planet.

Niemczyk’s art is fantastic and manages to effortlessly walk the line between cartoon and serious tones. The blood splatter on certain pages is a spooky but lovely touch. In addition, Rosenberg’s color matches the overall feminity of this book. With future covers featuring more “Lisa Frank” plus tampons type art, I am deeply excited for this book is going.

This book is clearly a labor of love for Cain who in past years left twitter due to harassment following the release of her Mockingbird comic featuring a cover where Bobbi wore a shirt saying “Ask Me About My Feminist Agenda.” I personally loved Mockingbird and I love that this comic has roots in that situation. The industry needs strong voices like Cain’s and I commend her for writing this and look forward to what the future holds.