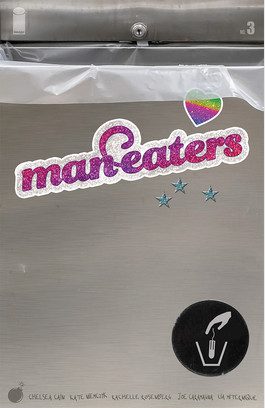 If you’re old enough you remember the original Teen Wolf franchise. (I haven’t seen the T.V. show of the same name) A high school guy wakes up one morning during puberty to discover he is turning into a werewolf. Hilarity ensues. It was a simple premise with an effective story for teens who felt that they had lost control of their bodies as they went through their hormone-fueled changes.

Man-Eaters is a lot like Teen Wolf; only for girls… who are turning into large man-eating cats…because of a virus called Toxoplasmosis X… and the comic series carries more wit, charm, and depth than anything starring Michael J. Fox. (No disrespect to Marty McFly) so maybe the Teen Wolf comparison begins and ends with teenagers turning into animals to give a visual metaphor to puberty. Glad that I cleared that up!

Have you seen this:
RADIANT BLACK # 6 (REVIEW)

Let’s face it; Cain has struck gold with this series, not with the premise of human/animal transformation, but with finding the perfect allegory for the modern teen girl’s viewpoint in our culture. The age-old attitude of men vs. women is now a way of life. The genders are beginning to segregate themselves from one another in ways that are akin to the race and civil rights movements of the 1960’s—separate water fountains, Women must drink the tap water which contains special hormones to help control the possible outbreak of the Man-Eater virus.

There is some smart writing happening here. Cain balances observant social commentary with razor-sharp dialogue between her characters.

For example; the boy’s club mentality of popular culture is being “invaded” by women. You don’t have to look too far to see this playing out in our own industry. Groups of male fans have long held any female treading in “their” territory with suspension and resentment. In the story you see this as the boys have their own study lounge where no girls are allowed; where the young men can, as the story tells us, “… It’s our one safe space to read comics, play with action figures, play games. You know, boy stuff.”

Have you seen this:
Catwoman: Lonely City #1 (review)

You’re easily sucked in from page one and the fun is over far too soon. This series will be a huge crowd pleaser when collected into a trade paperback and all this goodness is bound together.