“Isn’t it so often the case that we’re selfish and mean-spirited in just those tricky human situations that require our limited stores of saintliness?”

Charlie (Adam Driver) and Nicole (Scarlett Johansson) are not bad people. They are intelligent, successful, empathetic, and both dearly love their son Henry (Azhy Robertson). Most painfully, they are both fully aware of the other’s positive qualities. But both are also obstinate, short-tempered, and both feel that they are giving more than they are receiving. Such a situation is what lays the grounds for their divorce in Noah Baumbach’s Marriage Story. 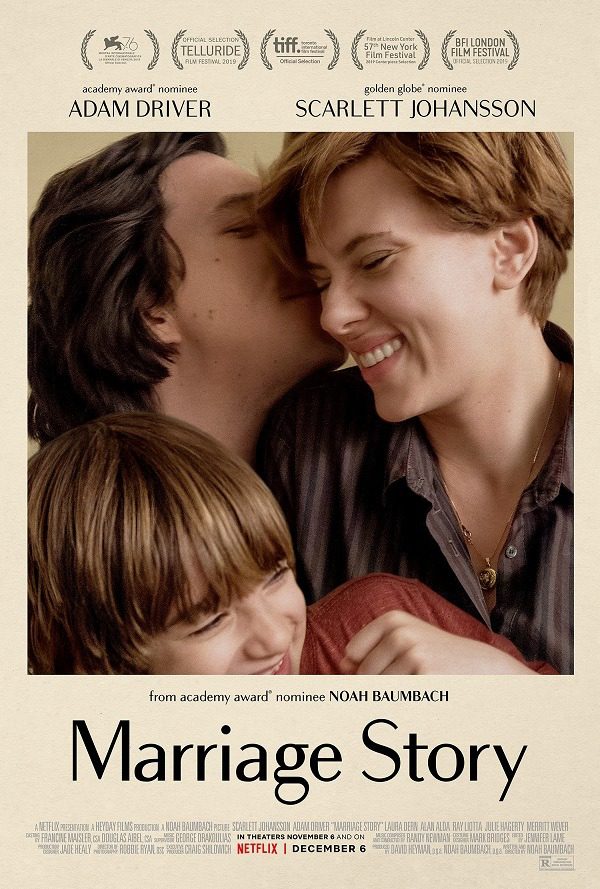 Their divorce is a messy, emotionally draining affair for both parties, and it is often as unpleasant to watch as it is for the characters to experience. To see two people who know each other so intimately tear each other down so savagely makes for a singularly stressful motion picture experience. While some label Uncut Gems as the most stressful film of the year, I humbly submit Marriage Story as the far more draining experience.

An experience that I must admit I felt myself otherwise removed from. I can recognize the technical finesse of Baumbach’s writing and filmmaking, how he never lets you feel fully sympathetic or antagonistic towards the central figures of Charlie and Nicole. Figures who are so believably embodied through Driver and Johansson’s performances. Their interactions with one another reek of an intimacy that has long been extinguished, but with a slight hopefulness under it all. Both parties on some level want to reconnect, to restore the previous love they felt for each other.

But both also carry too much unhappiness with the other party for their relationship to continue. What ensues is a battle where both parties dare the other to blink first. Watching Marriage Story, I often felt the film was daring me to blink as well. “Look at this relationship,” it says. “Look how much love they once held for each other, and look at where they are now.” It’s a story told with empathy towards its characters, but they were characters whom I felt little empathy towards.

All too often, we are more privy to Charlie and Nicole at their emotionally exhausted worst, leading to a pair that, while riveting to watch, left me tired and incurious afterwards. Their lives ended after 137 minutes, and little of what I had seen left me wanting to understand more.There are a great many people who found themselves stunned by Marriage Story and it’s easy to see why. The craftsmanship is nothing short of admirable. Baumbach shows an admirable restraint in his filmmaking style, eschewing flashy angles and perspectives in favor of capturing his actors at their most intimate. Through this, we see a searing authenticity under every line of dialogue, actor choice, and character interaction that is likely to strike an emotionally raw nerve for many audience members. Unfortunately, I simply was not one of them. Baumbach’s film is one that checks off every technical necessity to be a “great film.” But it’s a “great film” that kept me at an emotional distance