Marvel #1: Imaginative Tales from Across the Marvel Universe 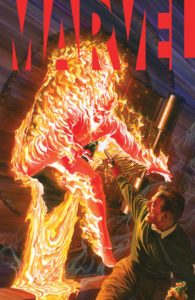 We are dropped off in a strange land. I mean, it may not be strange to you, but it is… different. Dark. Dismal. Full of, er… tentacle root things. And we have a new villain. Villain? Yeah, seems like it, considering he is feeding of the imagination and dreams of literally anyone who has ever imagined or dreamt something. A Nightmare. While this sets up a formidable foe in the Marvel franchise, it also sets up this character as a Crypt Keeper like figure. The comic’s narrator and the cohesive glue tying this one-shot story lines together.

Oh Peter… starting life officially with MJ, only to hear you have to cut back on your web making expenses. And now you’re stuck in some sort of time loop with Rhino, waiting for the right loop to defeat him.

The art style: wow. So different and I absolutely love it. It was such a nice break from the over stylized sleakness of modern comics. Smushy paint. That’s the best I can describe it (and I call myself a writer…). The art style is like if watercolors met chalk pastels, and were loosely applied to the page. But it’s amazing!

The story is a nice little trip into what Peter is thinking while trying to defeat Rhino, which is basically what is going on at home. The balance between being Spider-Man, and the man MJ fell in love with.

The Boy… and the Brute
Written by: Kurt Busiek
Art and Lettering by: Steve Rude
Colors by: Steven Legge
Editing by: Tom Brevoort

Oh I cannot express how happy I was to see the Avengers drawn in the classic style. So refreshing, and the best style, if you ask me. I like the classics! What can I say?

Beauty and the beast, Marvel style. Only a human with kindness can help subdue the beast that is the Hulk, to the point where he can return to his base form: Dr. Bruce Banner. Apparently there’s bad blood between the Hulk and the Avengers in this one-shot story. No wonder he was still in Hulk form, he was furious!

The story was short and sweet, but the real MVP was the art style. Nostalgia for the win!

The stories wrap up with “Nightmare” coming back, saying “weren’t those neat?” basically fulfilling his narrator role… only to show us he has kidnapped Dr. Strange. The stories were okay, nothing life-changing, but a nice way to give writers a chance to create their own Marvel Superhero one-shot.

Not gonna lie, I like the fact we have a new Crypt Keeper like narrator for the new generation. I used to love those horror comics with the gimicky narrator (remember Creepy comics with Uncle Creepy?). Glad to see Marvel continuing the tradition!

#Comics Marvel
Are you an Insider?News, reviews, & updates are just the beginning.