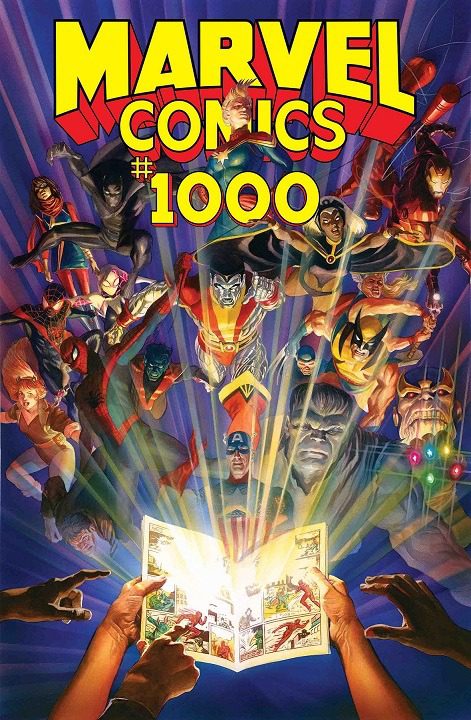 Marvel Comics is turning 80 and part of the celebration is 80 single page stories by the best in comics! It’s a who’s who of industry names and they are leaving no character untouched, no year is forgotten, no fan left out!
For fans who have spent time in the House of Ideas, this is the ultimate love letter. A touching tribute to the characters and moments that have shaped the Marvel universe over eight decades. From the companies first shaky steps in 1920 to the industry-leading powerhouse that it is today, this star-studded issue covers it all with a wink and a nod.

With writers that range from legends like Claremont, Busiek, Conway, David, and Waid to modern favorites like Hickman, Cates, Ewing, Lemire, and Zdarsky there are over 70 wordsmiths that crafted this beauty!

Plus artwork from all of your Marvel favorites. A murder’s row of talent that includes Campbell, Cassaday, Deodato, Garney, Kubert, Larson, Ross, Epting, Perez, Simonson and Quesada.

Have you seen this:
Nightwing #73 (REVIEW)

There is no way a Marvel fan can pick up this comic and not be wrapped up in nostalgia. These are hallmark moments created and recreated by the industry names that made them.

The cherry on top of this amazing treat is the memorial page where the gone-but-not-forgotten names of creators of yore are paid their respects. It is still too fresh of a wound to see Stan Lee’s name among the list of those who are no longer with us.

My first comic was a Marvel comic which I purchased 26 years ago. I’m so proud and blessed to still be around today to write the review for this creative masterwork. In my own way, like all Marvel fans, I feel that this milestone issue is as much my own as the men and women who toiled on countless issues over the years. I was on the receiving end of their hard work. I was there with them in the creative trenches, urging them on. I was right by their side as we waved the Marvel banner together.

Yet, there is a part of me as I have gotten older that has begun to feel that I am now a steward of Marvel. A conservationist that must preserve and maintain the name of Marvel for the enjoyment of future generations. For twenty-six years I have proudly stood my watch as a fan and as an unseen supporter.
For the last few years, I have shared my joy and passion through my writings and reviews. Always in the hopes that I can spark the imagination of another to begin their own journey through this magical medium. That I might do my small part to bring about the next generation of fans to carry on the good works that so many talented men and women have poured their hearts and souls into. That the characters and the company might live on long after I am dust.

Have you seen this:
Change My Mind Chat: Adam Lawson Of The Kill Journal

This issue is more than another milestone. It is a love letter to those that came before, those that stand to watch now, and those who are yet to come to the fold.

To every fan that has ever journeyed through the Marvelous Universe, I raise my glass to you. To those that will find these words in the distant future may you always have Stan and Jack in your hearts and may you always say “Make Mine Marvel”!
Excelsior!