Available On: Playstation 4, Xbox One

Marvel Heroes was originally released for Microsoft Windows June 4th, 2013. Gazillion Entertainment has finally released a console version, Marvel Heroes Omega, late last June. Like Activision’s Marvel: Ultimate Alliance, it is a comic-themed action role playing game, but it is also a free-to-play massive multiplayer online game. Considering the wealth of games in the market place right now, including HD rereleases of Activision’s Marvel: Ultimate Alliance games and NetherRealm Studios’ Injustice 2, the question is, should players spend their precious free time playing this game? This depends on whether or not players can overlook this game’s many flaws.

Story wise, Marvel Heroes Omega is not that impressive. Despite being written by Brian Michael Bendis, one of Marvel’s highly acclaimed writers, the plot is fairly standard and the in-game dialogue is quite forgettable. The game opens with Doctor Doom having acquired the Cosmic Cube, the first of many powerful artifacts he plans to obtain in order to become all powerful. It’s a standard comic book story, very reminiscent of the first Marvel Ultimate Alliance’s plot, the entire purpose of which is apparently to showcase various locations in the Marvel Universe. Throughout the game’s story, players will travel to places like the Xavier Mansion, the Savage Land, and Asgard. Considering that Gazillion Entertainment had Brian Michael Bendis write this, it should have been more than just functional. 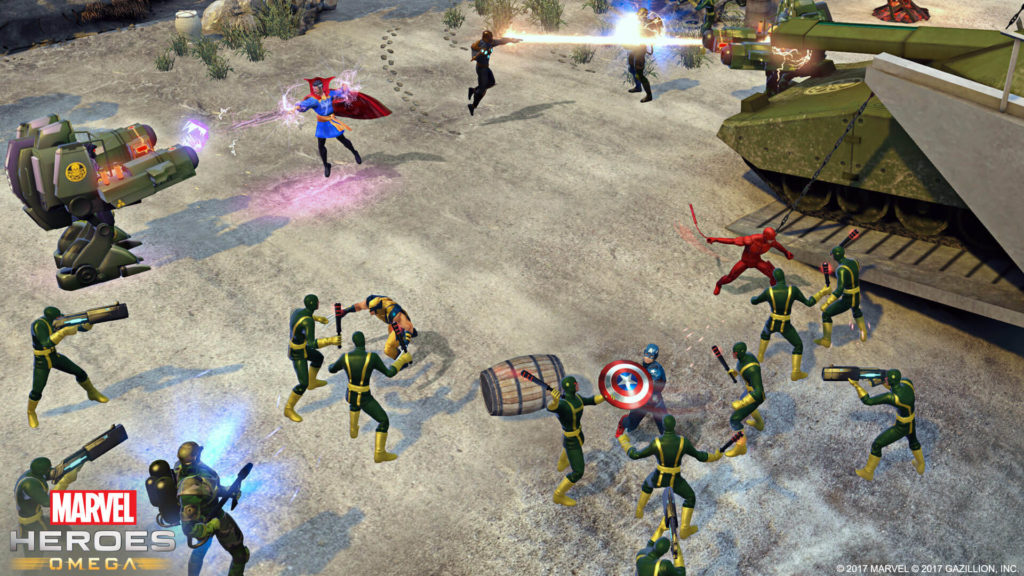 In terms of gameplay, Marvel Heroes Omega plays exactly like a traditional dungeon crawler. Unlike Activision’s Marvel Ultimate Alliance games, Gazillion Entertainment’s title allows for full customization of controls. While this means players won’t have the standard light and hard attacks and combo strings, as in Activision’s games, they can assign character powers to any button. Players choose from a wide selection of Marvel characters, each with their own unique move set. As players level up their characters, they can further customize their move sets through specific talents which alter how powers work. High level items also alter character performance in battle, giving them various buffs and abilities. The only negative to be found here is the inability to customize a hero’s appearance. Other than alternating costumes, players can do little here. This is a real disappointment considering most other massive multiplayer online games like World of Warcraft, The Elder Scrolls Online and Destiny allow for character personalization. Even Injustice 2 allows players to customize their heroes’ appearances. While not entirely a necessary feature, Gazillion Entertainment could have found a way to add this aspect to their game.

Marvel Heroes Omega’s graphics are passable, if somewhat dated. While most massive multiplayer online games usually are not graphical wonders, Gazillion Entertainment should have spent more time to improve the visuals, especially since it’s being released on the PS4 and Xbox One. When compared to Activision’s rerelease of Marvel: Ultimate Alliance 2, it is lacking in the area of graphics. This is particularly troubling considering that this title was originally released in 2009. Character models are comic accurate, but they aren’t that impressive. The comic panel cut scenes which play at different points throughout the game’s story are fairly entertaining, but they aren’t presented well. Despite how well drawn the panels are, the scenes move too fast for players to appreciate them. 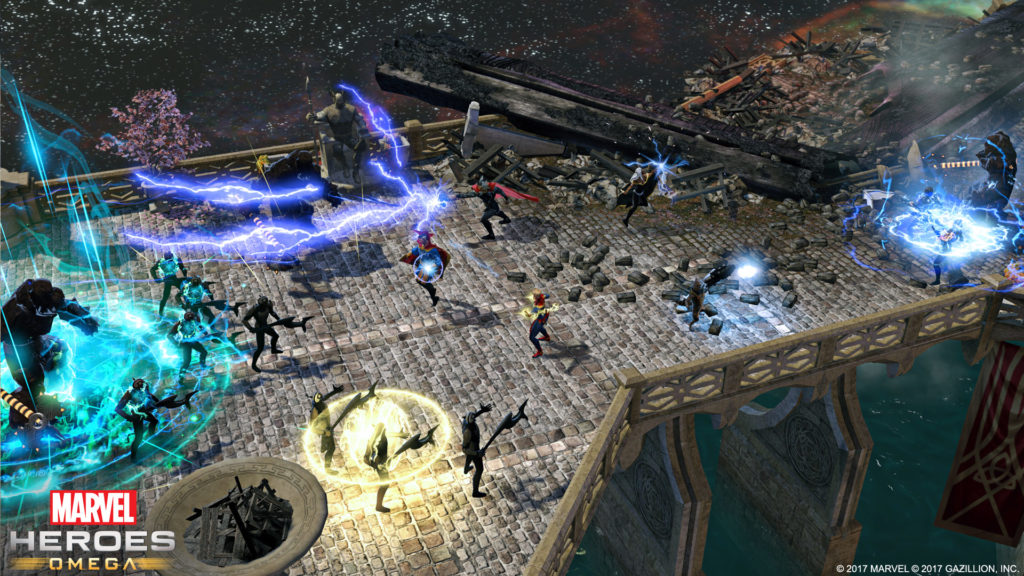 While audio quality in Marvel Heroes Omega varies, overall it is pretty good. Though the background music is forgettable and the henchmen repeat the same three lines of dialogue, voice acting for the heroes themselves is solid. For example, playing as Carol Danvers (also known as Captain Marvel, Ms. Marvel, Warbird and Binary) provides players with not only Danvers’ battle dialogue but her banter with other Marvel characters. The voice perfectly matches the character and the dialogue itself provides her the kind of personal depth we haven’t seen in Captain Marvel comics lately. While not groundbreaking, it is always good to see developers making the effort to have characters not only voiced, but given voices that fit the characters.

Despite Marvel Heroes Omega’s many short comings, it is hard not to recommend. Rarely do free-to-play games offer players a complete game experience. Right after playing the game’s introduction, players are awarded enough Eternity Splinters to buy one of the cheaper characters with which to play through the game. From there, continued play awards more Eternity Splinters for players to buy more characters and powerful upgrades. The game’s story campaign alone will take anywhere from 10-20 hours to complete (more or less depending on player’s desire to explore and play side missions). As with other free-to-play games, there are microtransactions which allow players to purchase in-game currency to buy heroes, costumes and upgrades. Unlike other free-to-play games, however, I never felt as if I was being forced to spend money to progress. For example, after a few hours with Warframe, I felt my progression was stunted and that I was being forced to spend real money to continue. Gazillion Entertainment should be congratulated on providing such an enjoyable experience from a free-to-play game.

Despite not being a major release by a well-known developer, Gazillion Entertainment has done a great job with Marvel Heroes Omega. It can’t be said to be on the same level as other comic-themed games, like Activision’s HD rerelease of Marvel: Ultimate Alliance 1 and 2 or NetherRealm Studios’ Injustice 2, but it is more than enough to give Marvel fans an enjoyable experience. There is more than enough content in this game to keep players coming back, regardless of how much money they decide to spend on in-game currency, or even if they choose not to.

Highlights: A solid Marvel-themed dungeon crawler that is free-to-play.

Weak Points: Despite the game’s story being written by Marvel’s Brian Michael Bendis, it is little more than functional and ultimately is forgettable. 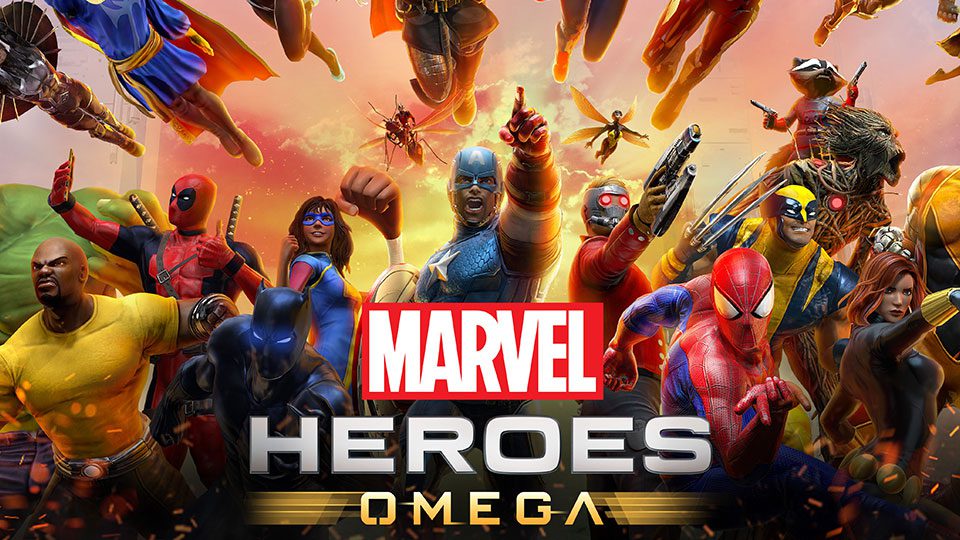