Set photos revealed that filming started in Budapest at the beginning of June, with movie leads Scarlett Johansson and Florence Pugh both spotted on set. The same photos also revealed the identity of Florence Pugh’s mysterious character to be Yelena Belova, the 2nd Black Widow.

Earlier today, Pugh posted a BTS photo of her makeup and hair prep for the film on Instagram, which you can see below. 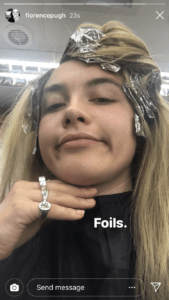 Furthermore, she was spotted at a showing of her new film ‘Midsommar’ at a movie theater in London earlier today.

In the WEIRDEST turn of events I went to see Midsommar tonight and @Florence_Pugh was IN THE AUDIENCE drinking a neat vodka like it was no big deal. I am not ok!! pic.twitter.com/bmMGrZ7dv9

Black Widow
Add your voice!Join the conversation on Discord...
Join Our Discord