Season 2 of Marvel’s Luke Cage on Netflix starts out with Luke taking out a drug manufacturing warehouse. Luke’s made a reputation for himself with the criminal underground in and around Harlem. They know he is one bad dude and not someone to be trifled with. After the action, the episode slows down to set up the foundation of the season.
We get a nice look at what all the major players in Luke Cage’s world are up to at this point, and we even get a few new faces added to the ensemble cast. I’m excited to see where Misty Knight ends up after losing her arm in The Defenders. These shows seem to weave Claire Temple, The Night Nurse (seriously when is someone going to call her that), throughout this whole Hell’s Kitchen saga, and this season, I’m sure, will be no different. Also, I loved Shades and Mariah last season, and I really want to know what plans they have up their sleeves.

I feel like this episode does pave the way for a great and interesting season. Season 1 of Luke Cage was one of my favorite seasons of the Marvel Netflix Universe (MNU?). I really loved the soundtrack of Season 1 and it seems like the music will continue to play an important part in this season as well. Colter and Dawson’s, Luke Cage and Claire Temple, continue to have a great charisma on the screen, but I  believe that Theo Rossi and Alfre Woodard’s, Shades and Mariah, steal every scene they’re in. 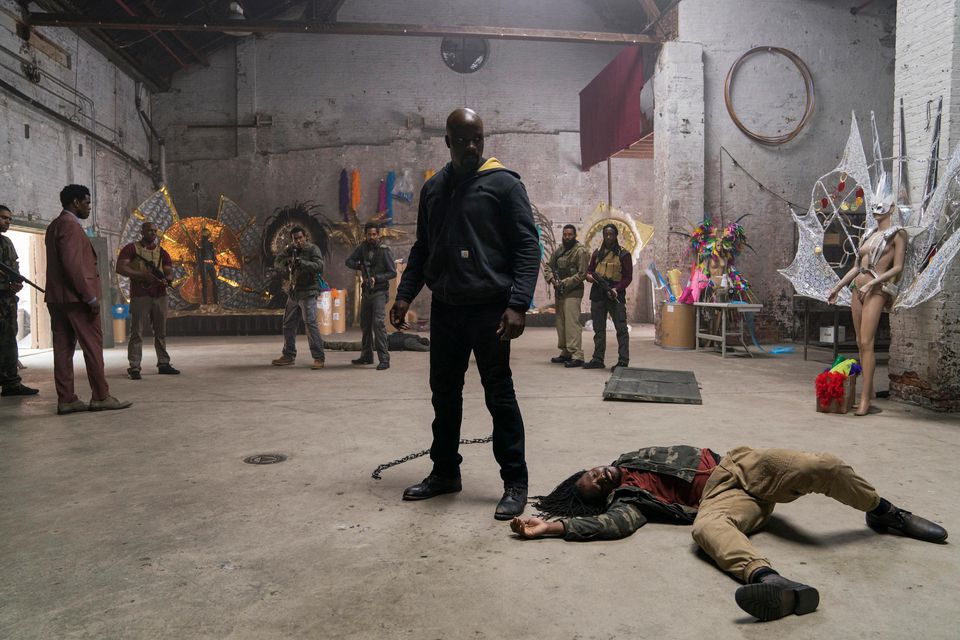 I was surprised to see that Lucy Liu was the director of this episode. Her not being known as a director, I have to say I think she did a pretty good job! Go, Lucy!

Personally, I don’t mind when these shows take things at a slower pace and set up all the pieces. It is a little more difficult to judge the merit of the entire season off this one episode, but it absolutely stands up on its own as a good episode.  All of this being said, I am very hopeful and looking forward to seeing where they are able to take us in this new season. This episode really cultivated a lot of interesting directions the series could take.

Season 2 Episode 2 “Straighten It Out”

Honestly out of these two episodes I enjoyed Episode 2 much more than 1. Which is understandable, Episode one had to lay the groundwork for what they were going to do in Episode 2.
I will be honest, there still wasn’t a ton of action in this episode, which is completely okay with me, as long as the story doesn’t disappoint. I’m pleased to report to you today, that the story in episode 2 does not disappoint.
After the status quo being set up in episode 1, the characters lives are already beginning to be shaken up. I’m literally on the edge of my seat in anticipation for what this season is going to deliver. Everyone’s relationships are put to the test in this episode, and for here on out we’ll get to see how they handle that. I for one am really excited about that.

I do want to mention that the music from this episode was phenomenal. I thought that was one thing that made Luke Cage Season 1 stand out from the other Marvel Netflix shows (you know the MNU), it’s soundtrack was superb. I was really hoping we would get more of that in Season 2, and we did get a little bit in episode 1, but episode 2 proved to me that they weren’t going to let that fall by the wayside

Episode 1 started a little slow, but when you pair it with episode two, I think Netflix and Marvel have the beginning of another great season. I can’t wait to see what else they are able to deliver.