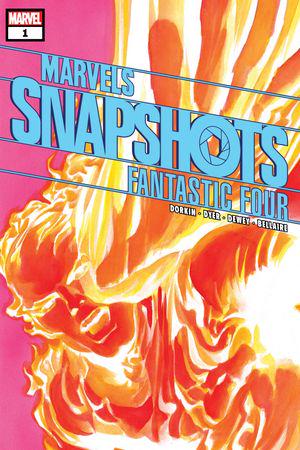 The previous Marvels Snapshots was a nice inside look into the private life of the Sub-Mariner, and the woman who loved him. In this one, we get a nice inside look into the former girl-friend of the Human Torch, AKA, Johnny Storm. We follow a reporter and her cameraman, looking for a newspiece at the town’s High School Reunion. Sure, wanting to drag a famous superhero through the mud on television would make a good news piece, and it seems the townsfolk were eager to comply, telling not-so-favorable tales of good ol’ Johnny Storm. Even upon showing up for the reunion, Storm was very non-amiable, and well, acted like a prick.

However, it is soon revealed, that the entire town was in on it, and wanted to protect the true character of Johnny Storm – a caring individual, who never forgot where he came from.

This was another nice insight into the mind of a popular hero, and the people he affected. These snapshots are a great way to learn a little bit more about Marvel’s superheroes, and the everyday citizens who help them along the way.

I found this one to be cute. A whole town coming together to protect their hometown hero. It’s heartwarming, and nice short story.