Measure Of A Man, the film based on Robert Lipsyte’s 1977 novel One Fat Summer, is the coming-of-age story about a fourteen-year-old boy named Bobby Marks who goes on an annual summer trip to the Lake with his family. Bobby is overweight, a bit insecure, and discovers he has to go throughout the summer without his longtime best friend, Joanie. To top things off, Bobby is also getting bullied by some of the locals. In an attempt to escape the thought of summer camp, as well as his bickering parents, Bobby decides to get a summer job providing yard work. 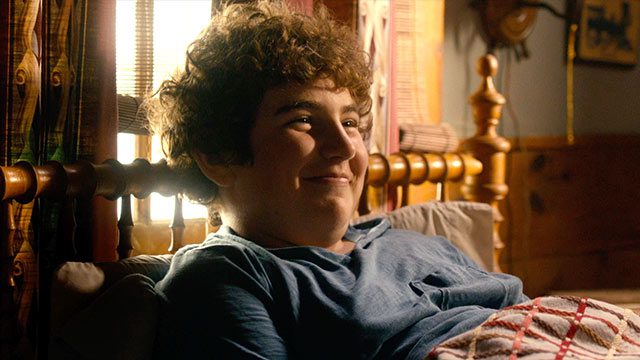 The film is narrated by Bobby as we follow him throughout the summer, and how much the 17-year-old has grown and learn to love himself during this time.  Meanwhile, there are a few subplots regarding Bobby’s sister and his parents. This doesn’t take away from the overall message from the film but instead enhances it and by the third act everything building up comes together.

There were great performances from the entire cast but Bobby Marks, played by Blake Cooper, really stole the show. Cooper was great in this role, his actions as Bobby seemed genuine, and down-to-earth all while providing charm to the character. Cooper has us sympathizing with the character one moment then the next filled with pure admiration. This film has viewers caring for this character from the get-go.

The conversations between each of the characters felt really organic and flowed nicely. Even scenes with minimal dialogue really stood on it’s own. These conversations felt legitimately real, it dealt with real-life issues such as obesity, bullying and divorce. This film doesn’t just try to wrap a nice little bow on top of it, there are definitely moments in life where situations may not play out as expected and this film takes pride in that.

Donald Sutherland is also another treasure in this film. His character, Dr. Kahn, hires Bobby to do yard work around his house. Dr. Kahn expects 100% from Bobby every day, and is quite frankly a hard ass in the film. As the film progresses we see the two begin to bond and Kahn becomes more of a mentoring type. Cooper has terrific chemistry with each of his cast-mates but it’s his interactions with Sutherland’s character is where it really shines.

Judy Greer, who plays Bobby’s mom Lenore, also shares many memorable moments on screen with Cooper as we she continues to portray the strong supporting mother, despite the internal issues she may be facing. Everything she does in this film just radiates positivity. Each of the actors, and the characters they portray are what keep this film moving at full speed. Everything about this film just feels natural and not forced.

Anyone whose been on the receiving end of bullying can relate to this film, in fact, anyone who has had to deal with any insecurities in the past will be able to connect to this film as well. It’s a solid and heartwarming story, with decent pacing, and a carried by fantastic cast. Measure of a Man is a story about dealing with insecurities and learning how to love oneself.