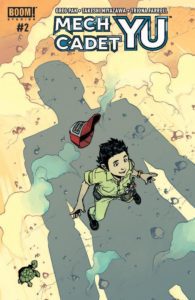 Every four years three robots fall from the sky and choose a cadet to pilot them. To everyone’s surprise one of the robots chose the son of a janitor, Stanford Yu.

In a comic book filled with giant sentient mechs, the strength of this series so far is its human characters. Greg Pak creates such a likable family in Stanford Yu and his mother.

A janitor rising past the level of a cadet and going straight to a Robo pilot, would not go on without its displays of prejudice, and it was handled well in this issue. An exuberant Yu walks out of his new living quarters to find trash left for him outside the door. It was a bit of a gut-punch to read, kids can be quite cruel and this felt like something that would actually happen. His reaction to this incident and “overall” demeanor to being chosen was heartening. He’s very ambitious and surprisingly mature in accepting who he is. Though his haste to accept such responsibility in the face of a possible war, shows how much he has left to learn. The back and forth between him and his mother as she signs his permission papers reeked of foreshadowing, it almost felt somber. 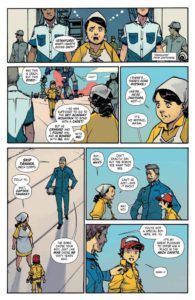 The fellow cadets are slowly being fleshed out, even general’s daughter Park, showed more than the arrogance she displayed in the first issue. The mysterious nature of where the Robo came from gives this comic book an insane amount of potential. They are sentient and incredibly powerful, so who made them and will they ever turn bad could be answered eventually.

The artwork fits the mech genre perfectly. To be more specific, the mechs have a classic design to them that any kid and their parent would want a toy of. It’s an older-more rounded look than the pointy mechs of today, very reminiscent of “Johnny Sokko and his Flying Robot.” The colors used in this series compliment the retro style quite well.

This series has all the makings of something special. There are many facets to this story that can be explored, depending on how far and how long into this series Greg Pak is willing to go. As things are right now, this is a fantastic comic book that can be enjoyed by readers across all-ages.