MegaCon Tampa Bay just passed and it was one conflicting Convention. There were Geekdom Gods like William Shatner, Kevin Smith, and Stan Lee but with a lack of panels and programs, it was chill overall.

The hours for Friday (4-10) could contribute to the lack of attendees, as the Main Hall and lobby areas were barren. The Main Hall was a collector’s paradise as there wasn’t any fighting for the exclusive comics or figurines. Vendors were easy to talk to and items were easy to find and browse through. One common theme form most vendors were the array of Funko Pops. Almost every vendor had Pop figures for sale from the commons to the Ultra Rear.

Friday brought the two of the biggest events for the weekend with Stan Lee Q&A and Jay and Silent Bob Get Old. Following the Stan Lee Q&A was an auction to raise money for the Hurricane Irma Relief fund that ended up raising $25,000 dollars. The big-ticket item was airfare for two to Stan Lee’s Comic-Con as a VIP guest and seeing the Black Eyed Peas in concert with Stan. It ended up selling for $10,000!

Jay and Silent Bob Get Old

Following after was the exclusive ticketed event, Jay and Silent Bob Get Old; which is part of the SModcast Network. The live show had everything you would expect from Kevin Smith and Jason Mewes especially after the high they got from raising 25k for the Hurricane Relief Fund. The show overall was fun but the middle parts dragged,  what felt like hours, was when Kevin Smith talked about buying burgers for the Super Girl episode he was directing. 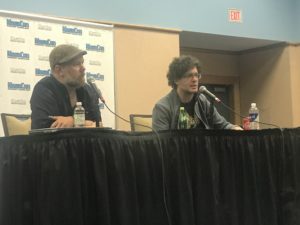 Saturday was a different monster all together. There were con-goers everywhere and the convention hall was full of Ravens, Deadpools and everything else you can imagine. The show floor was packed and the hallways were full of impromptu photos shoots. This was a stark contrast to the panels and activities on Friday.

The main attraction for the special guests on Saturday was the William Shatner Q&A, Dragon Ball Z Voice Actors panel and John Barrowman. This brought a nice diverse crowd of people into the convention as it attracted Trekies, Weebs, and Whovians. The other panels were the highly popular sketch duals from comic artist, how to make it into the “whatever” industry and the hit or miss Q&A panels.

Have you seen this:
Change My Mind #106: MCU Rewatch Vault — Avengers: Age of Ultron

For a 3-day weekend Convention, it was a nice change of pace for many guests. Comic artist Ed Mcguniess (Spider-Man/Deadpool) said it was a good change of pace compared to Baltimore last week and the madness of New York that would come in the next week. Most comic guests agreed with how relaxed the convention atmosphere was; from Kyle Starks (Rick & Morty), Tini Howard (Rick & Morty) and Megan Hutchison (Rockstar). The lines to meet your favorite Voice Actor were short and gave more time for fan interactions. 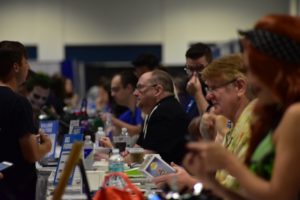 Megacon Tampa is a good convention for a laid back easygoing time. It is for people who want to go to a convention but not be overwhelmed by the large crowds and size such as Megacon Orlando, Supercon in South Florida and Dragon Con in Atlanta.