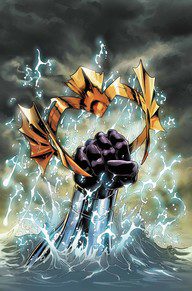 Mera is still dealing with the politics of the ocean and working with the kingdom she’s a traitor too. After the end of last week’s issue, we find out her Grandmother herself is betraying her. Who can she trust in Xebel? Working with Orm her sworn enemy is bad enough. Politics aren’t Mera’s strong suit. She’s a warrior. She’s now a Queen sworn to protect Atlantis. As you can expect, some of the people she decided to trust do some awful things. Nereus has wanted revenge since the day Mera refused to marry him.

This series started out so strong for me. The way Mera was portrayed as the tough, beautiful and brilliant Queen that she is. The art has remained stunning through and trough, but after issue 2 the plot started to fall flat slowly. This issue was almost strictly political. I understand the need for some out but this is the next to the last issue and it’s not until the final page that we find out there’s going to be a fight. Not even a fight. Just learning of one. I feel like if that’s a battle to save the ocean to dethrone a mad tyrant I’d like to see a little more battle. One issue was all on land concerning Orm’s love life again ending in a panel that got me excited to see a battle. I was however excited to see Leron show up. He’s been training Mera since she was s girl. The way he comes in is the only action in the whole issue. He does warn her. In Leron fashion. His character was a saving grace. Even in the end panel. Just to see he still sees her as the Xebel warrior he trained her to be. I expected some of the things between Nereus and Orm, there is one heck of an evil twist thrown in there. Ocean Master is most definitely back in his true form.

Have you seen this:
Aquaman Explained - What is Necrus?

To me, issues 4 and 5 could’ve just been one issue basically. They ran together with drawn-out politics and reunions. Mera seems to be a little more naive than I would expect. As I said, visually this comic has been perfect. Down to each detail in the ocean. Mera’ character is drawn exactly how she should be. I’m just starting to see that the character that’s written doesn’t always match up.