Michael Douglas Confirmed for ‘Ant-Man and the Wasp’ 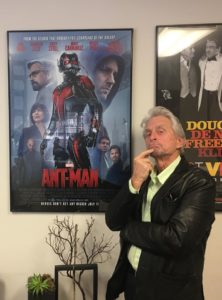 The sequel to the 2015 hit, Ant-Man, just received a giant boost with the confirmation that the original Ant-Man: Hank Pym, played by the legendary Michael Douglas, will return for the sequel.  While it is usually a given that that most Marvel Studio film’s respective cast will return for their sequel this wasn’t the case for Douglas, so his return is welcome news for Disney.  A Recent run of legendary actors such as Robert Redford taking part in Captain America Winter soldier, as well as Kurt Russell in Guardians of the Galaxy Vol. 2 has given the MCU a much needed dose of gravitas that it looks like will only continue into the future.

Douglas took to his Facebook to confirm the news with an ominous photo (seen left).  Douglas’s smug, but unusually lovable demeanor fit perfect for the role of Hank Pym the original Ant-man who Marvel fans have a love/hate relationship with.  It will be interesting to see if Director Peyton Reed dives more into the martial disputes between Pym and his wife the original wasp: Janet Van Dyne or if the movie remains s typical upbeat MCU affair focusing on Pym’s mentoring relationship with Scott Lang (Paul Rudd) and his daughter Hope Van Dyne (Evangeline Lilly).  We will have to wait to when Ant-Man and the Wasp hit theaters for those and so many more answers on July 6th 2018.

Please let us know what you think about the original Hank Pym’s return in the comments below or tweet me your thoughts directly @thereelbradbell.