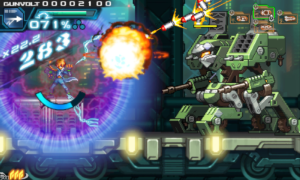 Azure Strike Gunvolt originally got an excellent release on the 3DS eShop in 2014 with a physical release from Shovel Knight Publisher Yacht Club Games coming shortly thereafter. The new version for the Nintendo Switch promises improved frame rates from 30 FPS to 60 in addition to new songs and upgraded graphics as well as the entire DLC catalog from the previous releases. This means an amazing amount of new content for an already deep franchise.

After being a special edition add-on for the original Gunvolt releases, Mighty Gunvolt Burst looks to make its own mark amongst the retro revival age with intense platforming levels and amazing pixel graphics. Easily the more retro influenced of the releases, Mighty Gunvolt Burst adds a small but important addition with the use of characters from the developer’s other franchises, including Mighty No. 9. The game also touts new mechanics with the new Burst Combo system pushing the title to new limits while adding another layer to the gameplay.

Have you seen this:
The Biggest Streamers on Twitch

The high-speed action games are set to get a full reveal this weekend at BitSummit in Kyoto as the developers look to reclaim some of their fanbase after a mis-step with the recent Mighty No. 9, a game most notable as a widely publicized Kickstarter failure. Comprised of former Capcom employees, the team at Inti Creates has worked on some of the flagship 2-D games of modern consoles including Mega Man 9 and Shantae: Half Genie Hero.

Look for Mighty Gunvolt Burst to hit the Nintendo Switch on June 15th  and the 3DS  on July 12th for $9.99 USD with Azure Striker Gunvolt: Striker Pack coming shortly thereafter on August 31st, 2017. 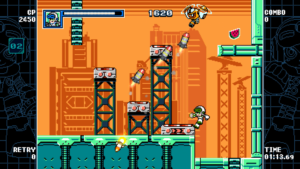 What are your favorite retro revivalist games? Do you think the Gunvolt series will translate well to the Nintendo Switch? Comment below and stay tuned to GWW for more video game news.