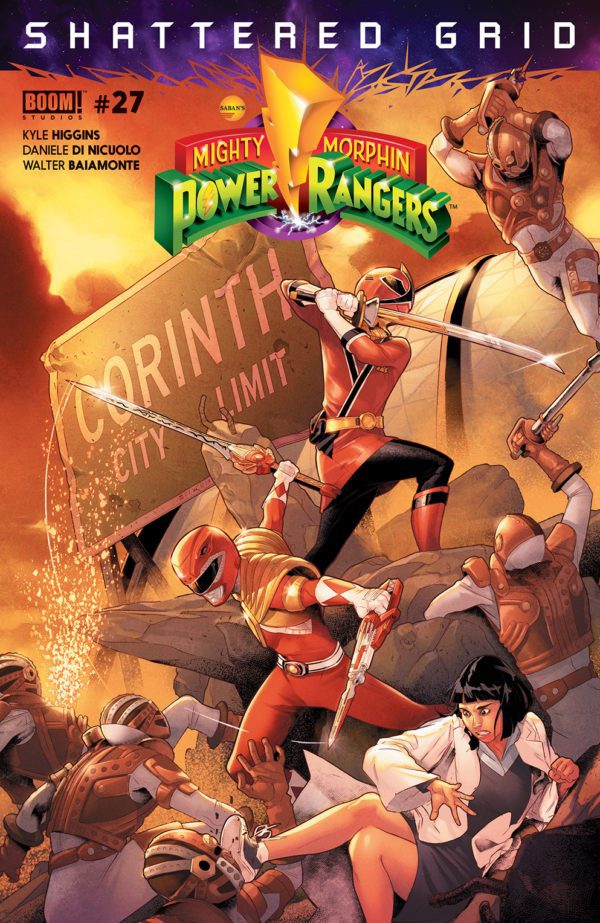 The Shattered Grid event for the Mighty Morphin Power Rangers comic has been an exhilarating ride as we see Drakkon invading many other worlds and points in time to gain control of other ranger team’s morphers to enhance his own powers. This new issue though shows us the main Power Ranger team finally taking steps to fight Drakkon’s army and come up with ways to win this war. One of the reasons I was really looking forward to this event were the crossovers and having these different rangers from different era’s meet up. This issue really feels like the first one where we get some interaction in that area.

Jason and Lauren team up together to go meet someone that has reached out to them that can turn the tides in this fight and along the way, they share a bit about themselves to each other as they’re both red rangers. Drakkon goes through his own internal workings as he thinks back to when he was doing a recon mission with the Zeo Rangers. He’s frustrated at how other teams hold Tommy to a high standard and how he’s just loved by everyone. He doesn’t understand why this is even though this feels like a step towards maybe having him go through some sort of redemption. I feel he has gone too far at this point to come back. I don’t mind a redemption story, but after murdering many people, especially ones that were close friends is a bit much to come back from. However, this does add layers to him and continues to show why he is one of the best villains the power rangers will ever face.

The art team for the power rangers comic continues to do some fantastic work and I love how this franchise works so well in comics. With flashy action, bright colors, and cool costumes. It’s a wonder why it took so long for them to start a power rangers’ comic like this even though we had the old ones from the 90’s but those just felt like good filler for kids that were fans of the show at the time. There’s a wonderful splash page in the issue showing off other teams fighting and if you want to know more about what was going on in those area’s, you’ll have to go pick up the recent Annual which I highly recommend.