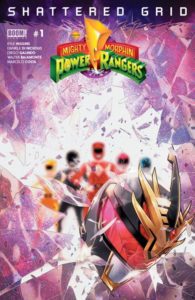 So here we are with Mighty Morphin Power Rangers: Shattered Grid #1. This issue is the absolute conclusion with the event and it definitely pays off for the most part.   With all that has happened and the way things ended on the last issue. I was really wondering how they were going to wrap it all up. So the beginning of the issue brings us to the battlefield as we see all of the rangers fighting the best they can while also dealing with Serpentera which fans know it as Lord Zedd’s ship. This however brings probably my only real low point in the issue.

We do get a very small zord fight but very few moves are exchanged but afterwards something really devastating happens to the rangers. With that though I want to go into what makes this issue 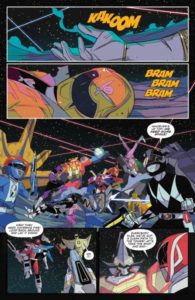 important. It shows a different side of our villain Drakkon and also goes into the roots of Power Rangers and explaining what it always meant to be a ranger. It’s about fighting so hard but never really knowing what the outcome will be. It’s a fight both Drakkon and the rangers are in, all for a different future they both want. The way they were able to close it all up and hint about changes in the future of the series just leave’s you feeling excited for the next issue.

The art team continues to knock it out with this issue but we also get some art from Galindo and Costa. They do a very big portion of this issue and there style together really help paint a world that just felt like the way it needed too. I can’t go into it much further than that because I don’t want to give away what this setting is. At the end of the day, Shattered Grid ties up the event very nicely and gives it’s readers what felt like an ending and a beginning at the same time. The Power Ranger books from MMPR to Go Go Power Rangers are two of the best super hero team books out there that I’ve enjoyed personally more than others from even Marvel and DC. Nothing more to really say here except Shattered Grid #1 is Morhpenomenal.