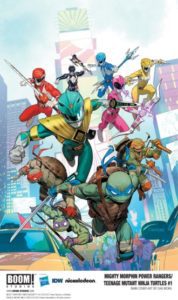 Two action-orientated teenage teams destined for a comic book crossover. Two long-running IPs with a common corporate connection help make this crossover possible. Fortunately, fans of both franchises benefit from this five-issue limited series written by current Power Rangers lead writer Ryan Parrott. This first issue nicely draws comparisons between the two teams while still retaining the action and quips both series are known for. The issue may be heavy on action, but it effectively setups up the plot and conflict. That balance of action and narrative provides readers and curious fans plenty of reasons to look forward to the rest of this crossover.

Parrott has scripted for both the main Mighty Morphin Power Rangers and Go, Go Power Rangers and the dialogue, setting, and pacing demonstrates his comfort and confidence with each of the Rangers and their human identities. The Turtles get less character development initially, but Parrott captures the banter in battle with ease. The rationale for Tommy’s disappearance from the Rangers and his placement in the Foot Clan are left vague and provide enough questions for readers to return for the next issue. The second half of the issue leans heavily on the two teams fighting each other, but even here Parrott retains the dialogue banter as the characters face off. The reveal in the final pages suggests that this series may be centered around the Power Rangers displaced in the world of the Turtles.

Have you seen this:
Wastelanders: Wolverine #1

If this Rangers in the darker TMNT setting holds true, the artwork and colors by Simone di Meo, Walter Baiamonte, and Igor Monti capture the mood wonderfully. Baiamonte’s color pallet and hues transition well from the bright colorful world of the Rangers to the darker shadows of the Turtles’ New York. The New York panels contain heavy doses of pinks and purples to simulate the street-lit cityscape while retaining the colorful feel of both teams. Simone di Meo’s version of the Turtles blends some of the harder edges of classic Eastman and Laird illustrations with his own interpretation of faces and masks. The result is a book with a consistent visual style that feels at home in either franchise.

Both the Power Rangers and the Turtles are no strangers to comic crossovers, but the teams rarely cross paths with each other. Ryan Parrott’s writing and the strong artwork by di Meo, Baiamonte, and Monti provide justification that these teams should do more together. Parrott has crafted a narrative that is accessible to any lapsed 80’s or 90’s fan but fills the story with enough details for readers of either franchise to latch onto and enjoy.