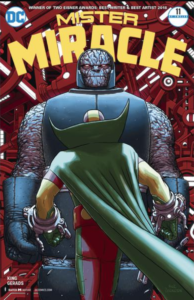 Mister Miracle is a trippy slice of life comic that doubles as a deep soul-wrenching depressive dark comedy. This issue keeps to that tonal dichotomy. In this issue we see Darkseid enjoying a veggie tray while negotiating for the end to the ongoing war on Apokolips by demanding Mister Miracle and Big Barda give up their son.

Throughout this series, there have been a lot of questions as to the reality of what Scott is seeing what the reader is being fed. Many panels in previous issues feature distortions at key moments. While readers, myself included, have speculated on what any of that could possibly mean, this issue begins to offer an answer to that question. I do not want to spoil anything there is a twist in its final moments that correlate to the distortion we often have seen in the final panels of previous issues.

Yet again, King has knocked it out of the park and has created something both odd and immensely special. Mitch Gerads art has been solid throughout. The splatter effect through blood or illustrated white noise is used to further the story element at key points. I love that this team is committed to the nine-panel grid as a tribute to Jack Kirby. Despite this being the second to last issue I do not know how this story will end. There are a lot of questions left unanswered but I do know this book will be remembered as a must read for comic and literary fans due to its dark, existential, and philosophical themes.