Another year has come and gone for the Motor City Comic Con and this show fails to disappoint! On the contrary, the show continues to evolve and get even better even before the completed expansion of the Suburban Collection Showplace in Novi. For me and many fans, suburban Detroit the second to last weekend of May has become entwined with this convention that will be reaching 30 years next year. 2018 has been an interesting year for the con and here’s a brief wrap of the event.

The assortment of celebrities that were in attendance covered a wide swath of fandoms with a major concentration on many of the actors from last year’s incarnation of Stephen King’s IT and a quartet scheduled for the 40th anniversary of Superman The Movie. 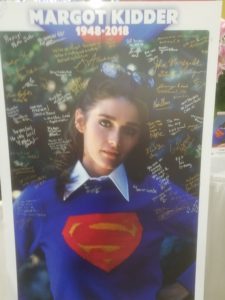 Unfortunately for the world, we lost lead actress, activist and most people’s Lois Lane Margot Kidder. During the convention they left her booth right where it was supposed to be and were taking donations for a shelter in Montana that she had worked with and had also rescued several dogs from them. They had this nice poster of her that people could leave messages for her family as well as a guest book. It was very much a beautiful tribute to her and the other actors and organizers of the 40th anniversary celebration had some very fond memories of her and expressed them very vividly.

Have you seen this:
Captain Marvel 2 is Looking to Cast a Micheal b. Jordan/John Boyega type

The artists and crafters were in rare form this year and were amazing to see. Along with seeing some familiar faces, there were several that were new to Detroit. From near and far they showed off their wares and themselves and the variety of offerings were fascinating to look at (including picking up a few things for the holidays). There will another article appearing soon with more on several of the artists in attendance.

The convention isn’t only a time for signatures, appearances and purchases. It’s also for interacting with friends, both old and new. A pair of my oldest and dearest friends and I usually find one another on Saturday and this year it happened again. While another pair of my friends weren’t in attendance this year I did meet up with a new pair which happened by pure coincidence. Tom Coa and Jake Wilson, better known as the hosts of Jake and Tom Conquer the World, fellow Michiganders and Geeks WorldWide partners were in attendance and we met up by complete accident and partnership and collaboration happened!  The entire convention was an outstanding experience and next year, for the 30th anniversary, will hopefully be mindblowing!

Have you seen this:
Gambling Time Limit in Sweden – Is This a Viable Option?
artists Convention it jake and tom conquer the world Margot Kidder Michigan motor city comic con Stephen King