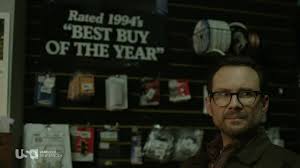 save the world.”  Elliott

The penultimate episode of Mr Robot opens with a 1994 flashback to the original Mr Robot; it’s a glimpse at the man behind the boy.  The scene serves to illustrate Elliott’s relationship with his father.  Elliott stole money from a customer, but his father didn’t force him to come out and be confronted by the angry man, or punish him afterwards.  Instead his father explained that, “Even though what you did was wrong, you’ re still a good kid, that guy was a prick, sometimes that matters more.”  In this scene his father protects him from the consequences of his action.  This is a very different man in comparison to the father Elliott depicted while sharing a childhood memory in an earlier episode.  Just, another reminder that Elliott is our narrator, but very unreliable.  Notice how even as a boy Elliott hides from the consequences of his actions.  Then lies to deflect the truth, “Dad, I didn’t do it.” 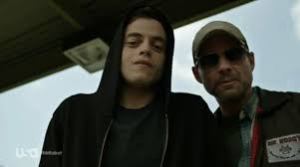 The standout moment in this sequence is the time elapse of the store front. People pass by, seasons change, the Mr Robot store front is replaced by another independent business owner, and another, and another…until finally the Bank of E, is left in it’s place.  The piano music is very ominous and leads the viewer back to Elliott’s present state of mental instability.  He struggles to comprehend Mr Robot’s true identity and very state of existence. I encourage fans of the show to re-watch all of the scenes between Mr Robot and Elliott in this episode, pay close attention to the staging of the actors. They are constantly mirroring one another throughout; note that this episode is called, M1rrOr1ng.qt. Reflecting one another, as a visual representation for their present relationship, as Mr Robot is a figure of Elliott’s imagination.  A reflection of Elliott’s own subconsci

“You’re the one constant in a sea of variables.” - Tyrell

The opening sequence indicates that Elliott’s father was his protector.  We already know that Elliott suffers from crippling social anxiety and depression, so it makes complete sense that his subconscious would conjure up his protector.  Especially since Darlene has moved back to town, and they are plotting to take down EvilCorp.  Elliott is doing something wrong, but for the right reasons, so when faced with possibility of being caught, his guardian reappears.  The paternal bond between father and son i 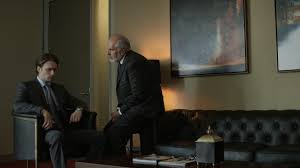 s the one constant that Elliott can cling to, as he faces an unknown quantity…life itself.

“There was a moment…a mistake…a compulsion…that led you to this point right now. My only advice to you is to find that moment…understand it, it’s the only way to reconcile the failure with yourself.” -Phillip Price

The episode concludes mirroring the beginning, only in place of Elliott’s guardian stands Tyrell Wellick (possible nemesis).  The confrontation between these two characters in the second to last scene mimics the Elliott and Mr Robot fight following the opening credits.  The characters are face to face, reflecting one another, viewed as two sides of the same coin.  The lighting is the same in both scenes as the characters are placed in the shadows of Elliott’s ill-lit apartment. In the Mr Robot/Elliott scene, the lighting serves as the visual representation of Elliott being kept in the dark about Mr Robot’s identity. Meanwhile the lighting in the Elliott/Tyrell scene serves to illustrate the darkness in Tyrell’s murder confession. 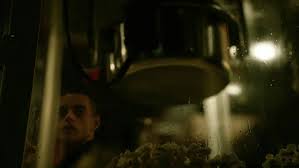 Have you seen this:
Geek to me Radio #209: 'Superhero Diaries' with James Gavsie-Marcus Theatres' Upcoming Movies with Bret Hoffman

“I thought, I would feel guilty for being a murder, but I don’t…I felt wonder.”- Tyrell

Cut to the fsociety arcade meeting place. One of the best scene transitions in the series, might I add.  Queue, Maxence Cyrin’s piano cover of Where is My Mind, the original song by the Pixies is playing during the end credits of Fight Club; and the viewer is abruptly brought back into a world of amusement…a world of “wonder.” The juxtaposition between these two back to back scenes is brilliant. They illustrate so many contrasting ideas about reality.  Tyrell Wellick is a husband, a father, an ambitious business man, and a murderer.  Elliott Alderson is a computer hacker, drug addict, mentally unstable, delusional, but the hero.  At the end of the episode they are two men, standing side by side, in a run-down arcade.  The scene exudes nostalgia coupled with fascination , when they are found in a place that reminds them of their youth.  A time when they were just two boys in the world. “Life isn’t binary,” as Elliott pointed out in episode two, it’s a mixture and “sometimes that’s more important.”