We’re going to talk about Mr. Shifty, a game by Team Shifty published by tinyBuild.

Mr. Shifty is born in the same mold as games like Hotline Miami. It’s an overhead action game, that utilizes hand to hand combat more than weapons. The game immediately starts you off right into the action, without any lengthy tutorials. It’s one of those games that tends to teach you as you go, which is how I prefer a game to be. It doesn’t appear that there’s a ton of controls/abilities to master, which makes it even better to not have a tutorial in the beginning just to show you the usage of about 4 buttons.

The game starts you out in what appears to be a library, with some button prompts to show you what you’re supposed to do. Mr. Shifty has a special ability to shift, or teleport. It’s a power very similar to that of the X-Men’s Nightcrawler. Your first test is to just move from row to row among the stacks using your shifting ability. 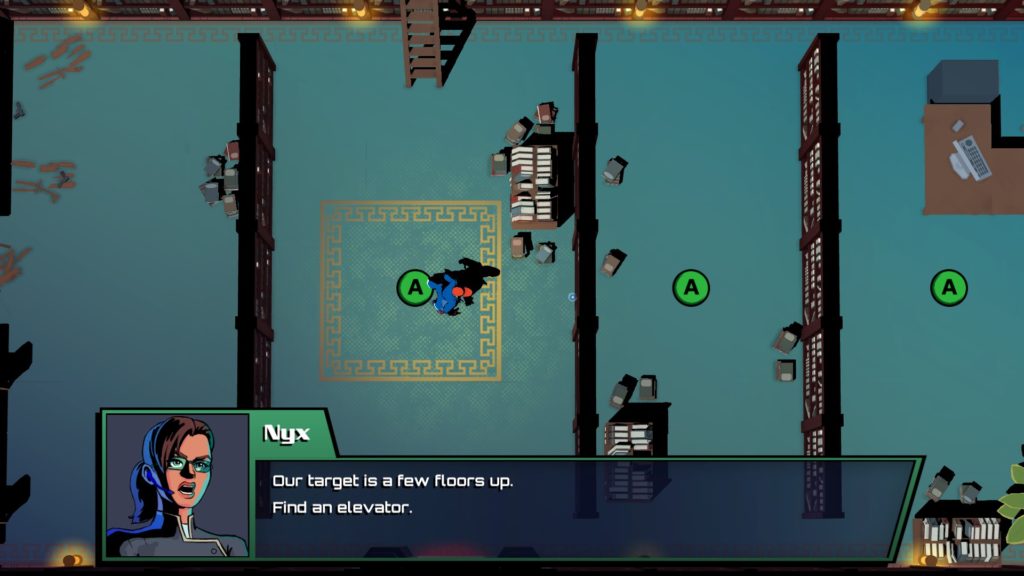 After you progress through this beginner area with no combat, you will take a quick elevator ride up to the next floor, where you will quickly find yourself conveniently behind the back of what appears to be a security guard. You will quickly take him out using your fists, and start to explore the level with the goal of finding the next elevator up. As I mentioned before, despite this resembling Hotline Miami with modern graphics, this game is primarily based upon using your fists to defeat your enemies. There are also opportunities to use the environment to cause damage to the hapless security guards. For instance, if a guard is within range of a closed door, you can kick the door so hard off it’s hinges that it will go flying into the guard. The game refers to this as “knocking” but there is nothing nice about this act. It’s very satisfying to to try and see how many guards you can knock down with one well placed kick to the door. 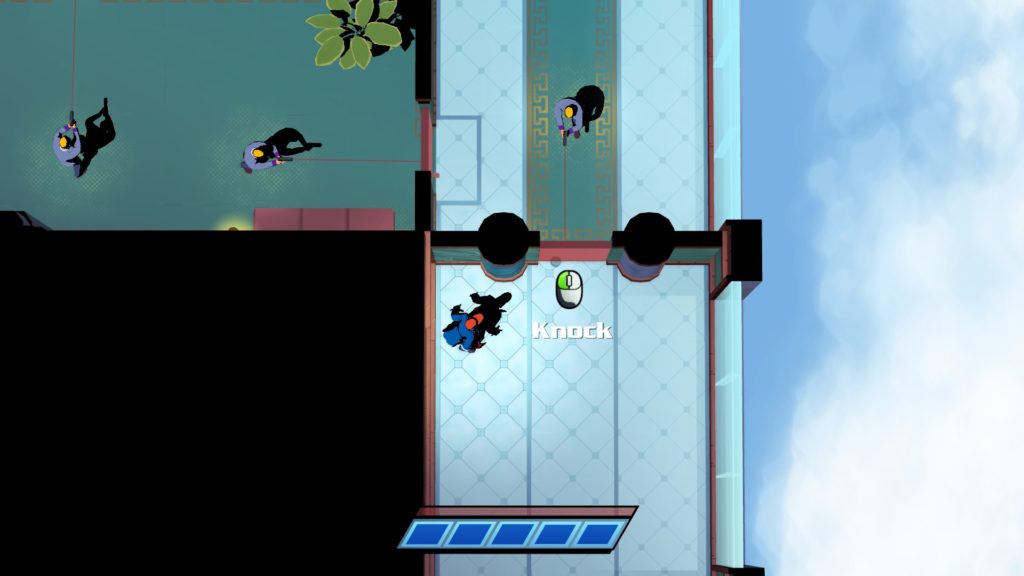 The game is pretty straight forward, and if there’s something to pick up, it’ll prompt you with a button on the screen, so far I’ve used giant sticks, and the heads of decorative statues to deal damage  or knock out the guards. The blue bar at the bottom measures your ability to shift. Once it’s empty you’ll have to wait a few seconds to charge. The animation in this game is extremely fluid, and it’s a lot of fun shifting around rooms and through walls to get the jump on a guard. The guards are fairly easy to take down, (this may change further into the game) but it will not take them many shots for you to be taken down and having to restart the level. Once you complete about 5 floors, you start to actually get a sense of the story. The game takes place in a building called Olympus Tower (not unlike Nakatomi Tower) and you’re going to have to work your way up accomplishing missions. 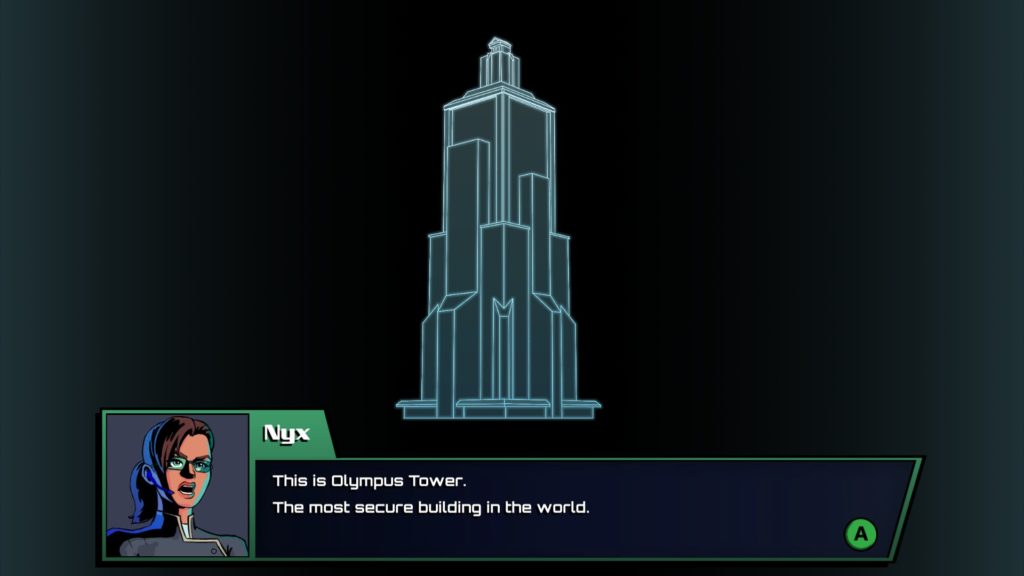 About an hour and a half into the game, I’ve had a blast playing it, and despite there not being a ton of story going on, the action more than makes up for it with the satisfying mistreatment of the guards. There’s some slight puzzle solving going on, for instance, this room, which I’ve had a hard time coming up with a description for, so one of my distinguished military friends will take care of describing this room which can be cleared out using a little puzzle solving. 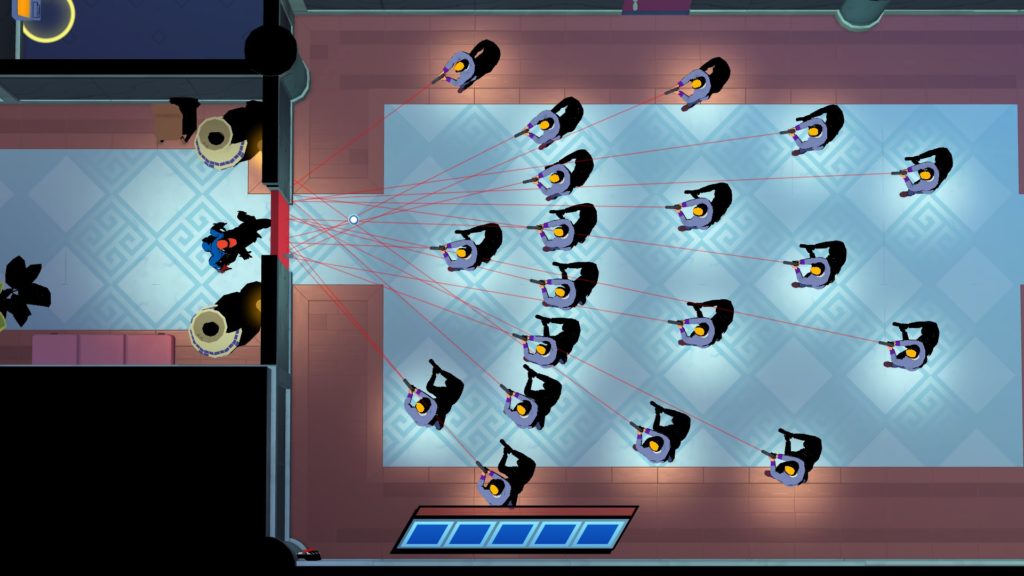 Take it away Admiral!

The ultimate goal appears to be a confrontation with Chairman Stone, who thus far I’ve not been able to find a good description of beca– wait, what’s that Nyx? Oh okay, once again, a guest will handle describing Chairman Stone with the utmost professionalism. 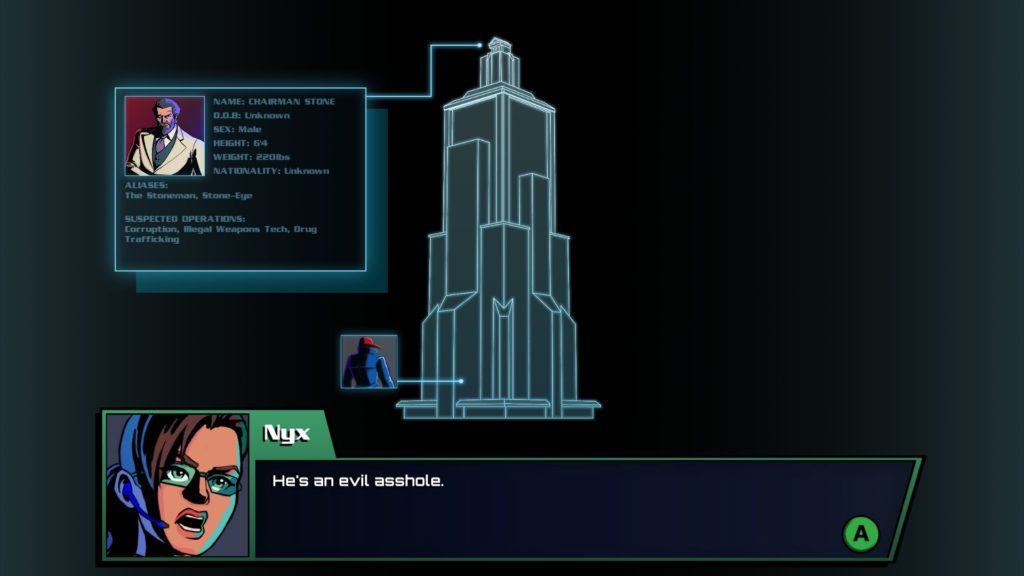 Well, so much for that. There you have it folks! In plain english, he’s not a nice guy. Mr Shifty is currently on sale with a promotional price of $13.49 until April 20th, and then it will go to it’s original price of $14.99. It can be purchased on Steam at http://store.steampowered.com/app/489140/ it will also be available for owners of the Nintendo Switch. I recommend buying this game for some good fun action.

It’s definitely worth picking up for a reasonable price. My only hope is that the storyline gets a little more detailed, and the enemies have some variety. The music is your average action music, nothing too flashy, but certainly not annoying.