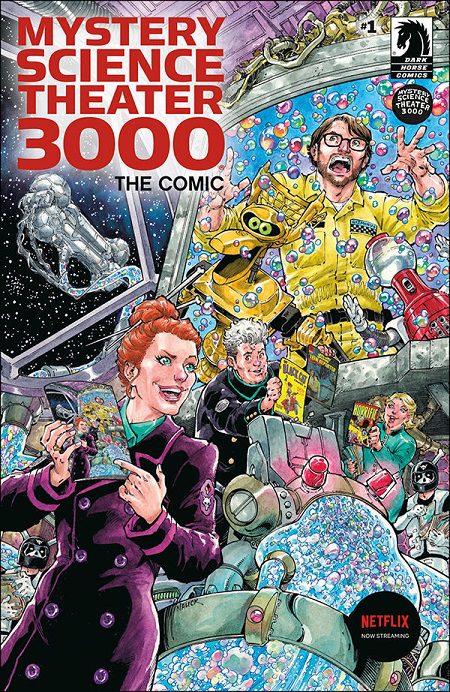 I never thought that this day would come.

My memory takes me back to the days of high school and sneaking upstairs at midnight on Sundays to watch syndicated re-runs of MST3K. On more than one occasion I was caught by my parents laughing my ass off in the middle of the night watching classic episodes like “Santa Claus Conquers the Martians” or “The Giant Gila Monster”. It was those late night viewings that shaped my young mind when it came to humor and laughing at pop culture.

I’ve been a huge fan of the franchise through all of its various cast changes and subsequent spin-offs. Fans of MST3k need to seek out Mike Nelson, Kevin Murphy, and Bill Corbett in their own successful spoofing spin-off “Rifftrax”; while Joel Hodgson, Trace Beaulieu, J. Elvis Weinstein, Frank Conniff, and Mary Jo Pehl did their own short-lived show called Cinematic Titanic.

But what brought MST3K back to the forefront of pop culture was show creator Joel Hodgson bringing a potential revival to Kickstarter. Fans responded by raising a record $6.3 million dollars to fund season 11. The support was so strong that it attracted the attention of Netflix and the rest is history as season 12 has wrapped and will be airing soon.

So it only makes sense that Dark Horse would want to jump into the mix with a MST3K comic. How do you make a comic book about a TV show that made fun of cheesy old movies? You make a comic about making fun of cheesy old comics. Issue one doesn’t waste a moment as it introduces us to the current cast as Jonah and the bots are now the subject of Kinga Forrester’s latest experiment. The daughter of Clayton Forrester, the mad scientist of Deep 13, has created a way to insert people into the reality of comics.

Do we find ourselves in the skies above Metropolis?

The crime-ridden streets of Gotham?

Do we wonder the halls of Xavier’s School for Gifted Youngsters?

Nope, in the classic MST3K style we are served up a random romance/teen title from yesteryear; a book best forgotten, a comic by the name of Johnny Jason, Teen Reporter. Once inside the pages of the comic Tom Servo takes over the role of the titular teen reporter Johnny.

From here the art shift gears to lampoon and spoof the old school printing quality and art style. This is a formula that is so easy to enjoy that I can see this series becoming an ongoing. The cast of MST3K has their work cut out for themselves as there is no shortage of bad comics.

The comic carries the same pacing and humor from the T.V. show; Joel Hodgson and other members of the crew lend their talents. Joined by fan-favorite Todd Nauck on art duties for the first half of the issue it seems like this might be the first of many adventures for the crew from the Satellite of Love. For fans of the show then this is the comic you’ve been waiting for.