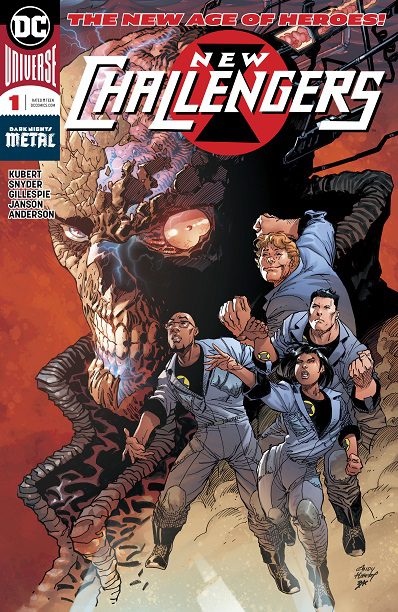 Don’t have a new idea? Recycle an old one. And if the source of that old idea is Jack Kirby…it’s hard to go wrong. Enter New Challengers #1, the latest series under DC’s New Age of Heroes banner. And, as if the legacy of Jack Kirby on its own wasn’t enough, DC has brought in penciler Andy Kubert and writers Scott Snyder and Aaron Gillespie. Suffice it to say that New Challengers #1 inspires a lot of high hopes.

The issue starts with a pilot, chartered to fly to an island, getting thrown out of his plane by a passenger who is covered in bandages and bleeding. The pilot won’t fly through the middle of a storm to get to the island, so it’s the end for him. Surely when they invented the refuse service sign it applied to people covered in bandages and bleeding. The plane crashes. Bandage Man survives, finds something, and smiles. Cut to Colorado and a woman falling out of a machine. She’s only the first to do so, and the next few pages introduce most of what will become the series’ team. All of them are confused by their presence, so Trina (the first woman out of the machine) recounts her final minutes in Gotham City where she was apparently eaten alive by aliens. It turns out that all four characters are dead. A character named Prof arrives and proceeds to info-dump literally all the info that has ever been info’ed. These four dead people have been selected to become Challengers of the Unknown to “confront and solve the mysteries of our universe.” Because they’re dead they are living on what Prof calls “borrowed time.” In the base, they are perfectly protected. As soon as they leave the base their hourglass-shaped tattoos will start counting down how much time remains until they die. This is demonstrated immediately when team member Robert demands to leave, steps through a portal, and proceeds to melt into a puddle of goo. He’s immediately replaced on the team by another woman. The rest of the team agrees to join and is sent on their first mission.

The weakness of this issue is how much is packed into it. New Challengers #1 is an exposition fest with characters dodging word balloons that are flying in all directions. It would be easy for the art to feel static under such a verbal volume. Coming to the rescue—and making this issue remotely tenable—is Andy Kubert, whose layouts take maximum advantage of space while still conveying movement. Much of the issue feels like artistic grunt work as Kubert’s art is subservient to lengthy dialogue; a large number of distance shots and small panels keep the art from being overly detailed or dynamic.

Kubert gets a few opportunities in the beginning and end to open things up. Some highlights include a detailed frozen waterfall at world’s end and an 8-pincer crab beast. As for the heroes: Kubert’s character designs are distinctive excepting the two women characters—Trina and Bethany—who are difficult to distinguish in the final pages (the only time they are really together). Part of this may be the fault of colorist Brad Anderson; in addition to changing background light colors and sources, there may be confusion of visually representing the ethnicities involved.

What Kubert is ultimately rescuing in New Challengers #1 is Scott Snyder and Aaron Gillespie’s script. Metal and Justice League: No Justice point to Snyder’s love of detailed, story-slowing exposition; of course it is just as possible that Gillespie wrote the dialogue or at least the expository portion of it. Regardless of how it was written, the script for New Challengers #1 is overfilled with exposition that slows the middle of the book to a near snail’s pace while simultaneously telling the reader virtually nothing about the characters. Aside from Trina there is no character development for the other team members. Surprisingly little is learned about the entity Trina and company are working for as well. This was probably an intentional omission given the issue’s final two pages, but it feels less like a mystery to be paid attention to so much as a clumsy oversight in the wake of overwriting.

Snyder and Gillespie partly redeem this first issue through the action in its beginning and end (as well as the very good development of Trina in the middle). The pacing picks up in these places, and there’s a sense of mystery. I found myself caring about one character (the only one I knew anything about). Hopefully, this writing team finds a way to incorporate more action in subsequent issues because their dialogue is too stale to carry the day.

The New Age of Heroes was meant to put artistic talent front and center. Its results have been hit and miss. In a backhanded way, New Challengers #1 is a great example of its mission statement. If not for Kubert’s abilities I’m uncertain whether this issue would entertain at all thanks to the sheer volume of dry text in play. On story and dialogue alone I am not at all compelled to explore the next issue; the art, though, resonates and may be sufficient to check out New Challengers #2. Perhaps by then the script will catch up with the visuals and prove equally compelling.