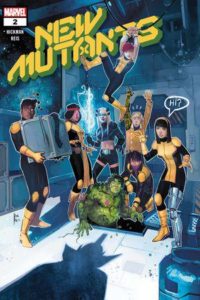 The adventures of MUTANTS IN SPAAAAAACE continue here! The team has gone through space court and thanks to their crappy space lawyer have been found guilty! BUT! Not all hope is lost as the team is released into the custody of the Shi’ar empire and that puts them under the charge of former fellow teammate Cannonball and his wife Smasher. It’s a happy reunion which should warm the hearts of longtime fans.

The time that Hickman takes in between action sequences really sets up the book as being about family, friends and making the readers fall in love with this cast of characters. It’s hard not to get involved with the team as they sit and play cards, reminisce about the good old days, and give each other a hard time. It’s this infusion of heart that makes this team book stand out from the usual offerings on shelves today.

It’s the little moments that carry this book a long way. From Smasher punching Sunspot in the nose to help him get over being a stuck-up prick, to the kids making up a poker game out of alien playing cards, to the big reunion at the start of the issue.

But all of this plays out on a stage where galactic politics moves in the background and we watch as the Shi’ar ready their soon-to-be queen Xandra. She is taking the throne from the empire’s current stand-in Gladiator. It’s her preparation for the royal court that sends the New Mutants on their next mission, escorting the lovely but deadly Deathbird to the throne-world.

Reis’ art is amazing and a deviation from the standard art that readers are used on team books. Paired with Lanham’s vibrant colors this comic pops off the page! The end product is a visual adventure that readers are going to want to take their time to enjoy. While I was skeptical about this series in issue one, seeing the direction that Hickman is taking has me invested and wanting more.