Night Ranger is back with a new Album

Frontiers Music Srl is proud to announce the release of “Don’t Let Up”, the 12th studio album from Night Ranger. “Don’t Let Up” will be available on March 24th and in both a standard edition and a deluxe edition (featuring bonus track and bonus DVD - physical format only). 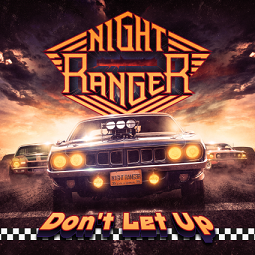 Anticipated by the first single “Somehow Someway”, “Don’t Let Up” is the culmination of the band’s work to date and celebrates the band’s 35th anniversary with incredible melodic cuts and hard rocking numbers. Self produced by the band, Night Ranger’s new album has everything the fans, both old and new, could ask for!

The “Don’t Let Up” album is the result of five musicians living and breathing rock ‘n roll 24 hours a day. 35 years on and Night Ranger is once again ready to let the fans know “It’s Only Rock and Roll, but I like it,” says Jack Blades of the new album.

Night Ranger has earned widespread acclaim, multi-platinum and gold album status while leaving their indelible mark on the music charts with a string of best-selling albums (Dawn Patrol, Midnight Madness, 7 Wishes, Big Life and Man In Motion), its popularity fueled by an impressive string of instantly recognizable hit singles and signature album tracks. Producing legendary hits such as “Sister Christian”, “Don’t Tell Me You Love Me”, “When You Close Your Eyes” the anthemic “(You Can Still) Rock In America”, along with “Sentimental Street”, “Goodbye”, “Sing Me Away”, “Four in the Morning” and more. The band was also one of the first big “video” bands, with over 10 number 1 videos on MTV.