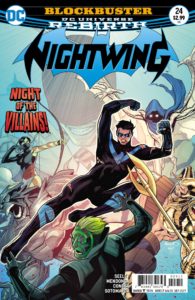 To no ones surprise, Nightwing has been doubled crossed by Blockbuster, and must fight off a submarine full of villains.

Blockbuster lead Dick into a trap on White Shark’s submarine. The sub was filled with villains, unfortunately there wasn’t anyone worth mentioning actually on. It was still a fun story, and I liked how Nightwing used skills taught to him by Batman to defeat some of his opponents. This issue was 98% action panels, but that’s not a bad thing because Nightwing’s fights are always fun to look at. It does however, leave very little to talk about without going blow by blow with who he fought. The ending was an overused but effective cliffhanger. I really don’t know how Dick Grayson is going to get out of it. 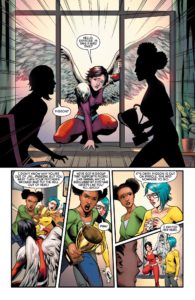 The 2% of the issue that wasn’t action scenes, was The Pigeon returning back into Shawn’s life. Considering how manipulated Shawn felt when she was her sidekick, it’s a surprise to see Pigeon get an invite to stay. I knew the Nightwing and Defacer romance wasn’t going to survive, but she is making an incredibly dumb mistake. Too much to hope for, that this leads to my Dick and Babs ship?

A new art team has joined the fray, and they draw a pretty darn good Nightwing. The action scenes were done fantastically too. An issue with nothing but fighting could have easily become monotonous, but each individual fight was creative and interesting.  That is credit to the creative team as a whole.

There is nothing better than having an action packed story where a hero must go level to level defeating opponents in order to face the big bad at the end. Don’t get me wrong, Nightwing #24 is no “Enter the Dragon,” but it was a solid issue and a lot of fun.