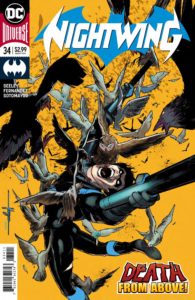 Shawn leads the Run-Offs as they attempt to stop Blüdhaven from tearing itself apart, while Nightwing and Blockbuster track down Raptor.

Tim Seeley’s run on Nightwing has finally come to an end, and he has successfully put Dick Grayson’s character development back on track. The return to Blüdhaven has given him purpose and helps him stand apart from the rest of thBat-familyly. The New 52 attempted to rejuvenate the DC Universe but some heroes long histories and friendships were gutted in the process. Dick was never a Teen Titan, he was an 18-year-old Batman when he subbed in for Bruce, and he was mostly relegated to side stories of big Batfamily events. Rebirth saw the return of Titan friendships and his Blüdhaven home city included with new villains and allies. Those new allies really shine in this run with The Defacer and her group of ex-criminals playing an integral role in this final story arc. They were a likable bunch, and I hope to see them return.

Have you seen this:
Are you Afraid of Darkseid? #1 (review)

The world-building may have been spot on but the villains fell somewhat short. Raptor started great as an old friend of Dick’s mother, but he became so one dimensional in the final arc. Both he and his surprise love interest Pigeon did redeem themselves in this final issue though. Raptor’s moral ambiguity peeked back in and Pigeon went full exorcist. There were great ideas there, but it felt incomplete when it came to the antagonists of this comic series. 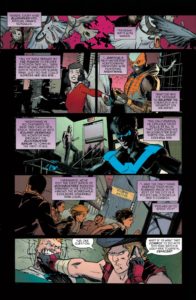 The art team did solid work on this run. The colonists always did a fantastic, giving Blüdhaven a more Las Vegas-style brightness rather than the gloomy New York Gotham City. Admittedly, Javier Fernãndez was hit or miss for me at the time, but I always enjoyed his character designs and action sequences. This series had the most consistent art team changes, everyone did a good job and it never looked like they rushed to use a replacement artist, which sadly happens a lot in comics.

Not a perfect Nightwing run, but an important one that turned out to be a lot of fun. I’m hoping the new creative team doesn’t discard the new characters or move this series back to Gotham City. This series has done the Nightwing Justice, it is exactly what the character needed.