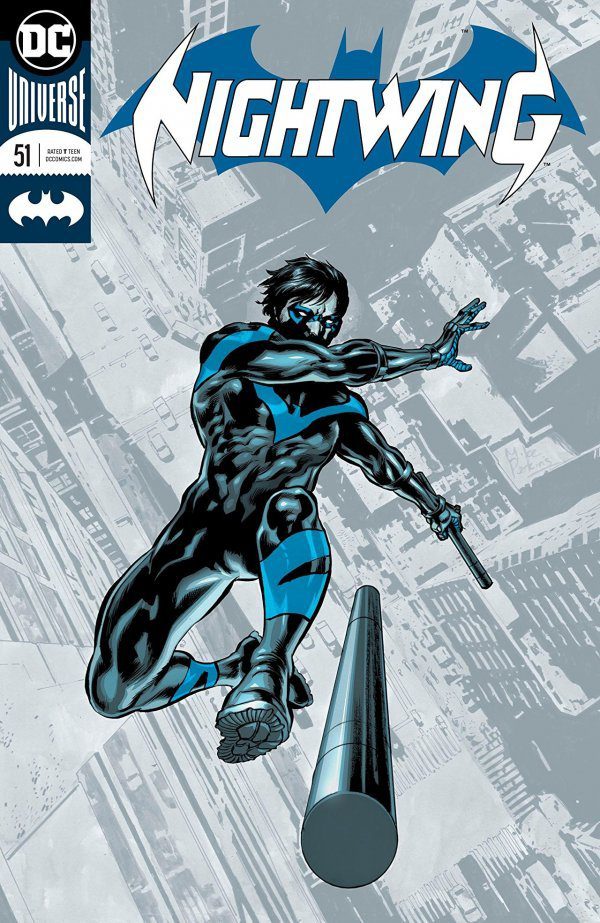 Nightwing #51 was something else for sure.

I have no problem with DC making him a dark character. Nor do I have an issue with DC putting Scott Lobdell in charge — as good as Benjamin Percy was with the Dick Grayson.

Call it an overreaction, but I’m a bit wary about the manner in which Lobdell will reinvent the character. In Percy’s last issue, Ric Grayson seemed angry and unsure about his direction. In Nightwing #51, he acted like a pissed off teenager.

I think most people can agree on this: if any Robin was going down this path based on their days as Batman’s sidekick, it was Jason Todd. And Grayson certainly would’ve been the last.

I’m worried about how far Lobdell will take this. He’s good at what he does, but this is certainly uncharted territory — and a huge risk with such a beloved character.

Grayson’s worst moment this issue was clearly the scene with the mugger. As annoying as his interaction was with Alfred at the bar, the way Grayson freaked out over the mugger encounter was infuriating.

“And that’s when I realize I might not be fine. If I can do this without thinking? Just on instinct…? This isn’t the life I want.”

What does that mean?

Is he done with this “blank slate” nonsense? Or will Grayson visit “Dr. Gruidae” — who appears to be Scarecrow (Dr. Johnathan Crane) operating under a new professional name, and showed up briefly this issue after popping up in flashbacks throughout Nightwing #50 — with the hopes of addressing the fears from his past?

Or is it something more serious?

I honestly have no idea. The change in writers leads to a ton of uncertainty with Nightwing. He could be like this for a while or change in a few issues. It’s exciting and infuriating at the same time.

I think Lobdell’s first crack at this was good, not great — thus the rating below. But I legitimately didn’t like Ric Grayson this issue. I can’t stress enough that he is VERY ANNOYING.

Lastly, looks like a Blüdhaven cop, Detective Sapienza, is taking over the mantle of Nightwing Looks very similar to Nightwing, especially with the mask on. Not sure how everyone’s going to receive the gun though. I give him three issues, max.