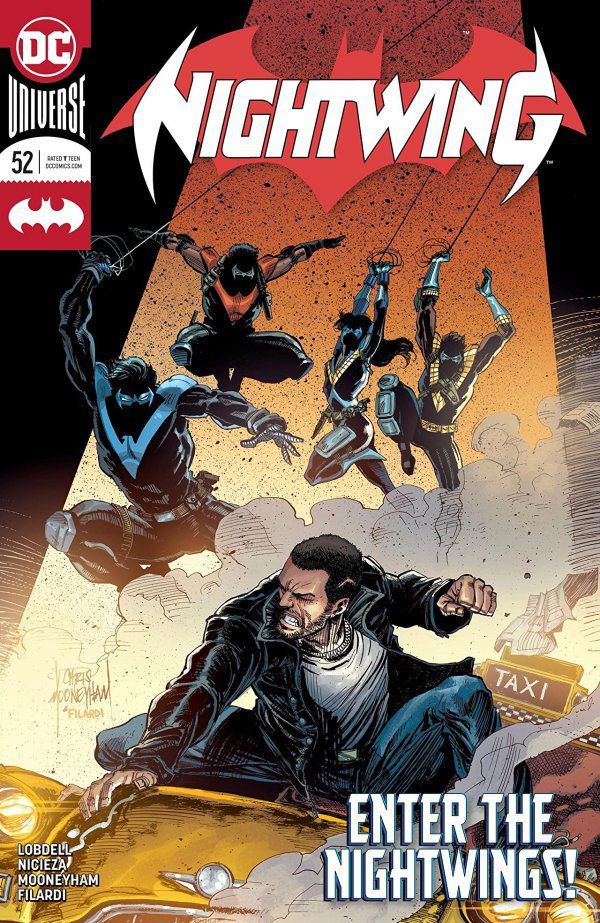 The name Ric Grayson has yet to grow on me. I doubt it ever will. However, the character Ric Grayson made great strides in Nightwing #52.

He’s still not the old Dick Grayson. He probably won’t be that again for a very long time (if ever again). But with the capable Scott Lobdell in charge, I don’t think that will be a problem.

Nightwing #51 ended with Ric’s old reflexes kicking in when a Blüdhaven mugger pointed a gun to the back of his head. I was a bit concerned about his initial reaction. As much as it can’t be easy for him to feel like a stranger in his own body, what’s wrong with having killer self-defense moves that are second nature? I’ll tell you what: nothing.

It appears Ric feels the same way now, too.

But I don’t expect him to start using his abilities too, too much different than before. Meaning he’s not about to start killing people, though something tells me he will eventually push things to the limit.

Why? Even though some of his moves are practically instinct, he’s still not fully in control — as we saw in Nightwing #52, where he tried jumping from building to building and failed. So he may make a mistake. Also, he doesn’t care about everyone like he used to. In fact, he’s the exact opposite of that now. So as he starts to lay into more and more criminals, he may grow an appreciation for the excessive violence.

And if Grayson decides to throw on a costume again, I don’t think it’ll be one of his old ones. At least it won’t be anytime soon, not with the new brigade of Nightwings suited up.

I don’t think any of them will die, but I have to think somehow Grayson winds up saving all three from whoever or whatever it was that took Burl.

Also, really loved Chris Mooneyham and Nick Filardi’s cover and artwork this issue. My favorite image, even more than the cover, was the very first page where Grayson is watching the ambulance scene at Melville Section in Blüdhaven. Very gritty and un-Dick Grayson-like.