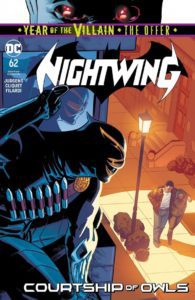 The odd story of Ric Grayson continues in Nightwing #62. He continues to show Dick Grayson-like qualities. As much as he suffers from a serious case of amnesia, it’s not surprising the fiber of his being still surfaces. In some ways, Ric welcomes his old self. Yet, he’s very quick to say that’s not who he is anymore.

Maybe this strikes a chord because he was once such a promising individual who did so much good, and now he’s afraid to fly embrace that person again. Dick Grayson wasn’t without his flaws, like anyone else, but he did a lot of good. And Ric really isn’t that much different. Just for some reason, he wants there to be some line of demarcation which separates him from his old self.

Truthfully, the only difference between Ric and Dick at this point is Ric saying he’s not the same person anymore.

More from GWW
Geek To Me Radio #17: COVID’s Effect on Comic Shops with Justin Burnette-Doctor Who Fan Casting with Writer Richard Dinnick

(Spoilers ahead. Don’t read further if you have not read all of Nightwing #62.)

Ric’s new “Not Nightwing” get-up leaves a lot to be desired. Hopefully that continues to develop. For now, I know I like that a lot less than his previous t-shirt or death jacket and jeans combination.

With Talon (William Cobb) being teased on the cover, I thought he’d go toe-to-toe with Ric, but his reconnaissance is far more impactful. I really thought the drone was controlled by someone who was going to take Ric’s identity public. (I probably should’ve put two and two together.)

Of course, the most shocking part of the entire episode is Ric revealing his secret identity and past to Bea. Talon’s presence puts her in immense danger, though she would’ve been in trouble just by associating with Ric, based on how long the drone was able to track him.

Now, Bea’s been very supportive of Ric since they’ve known one another. But I do wonder if she’ll try to push him to welcome his old memories back. She’s seen the good in him from the start and the only way to truly get all the good out of the man is to let Dick Grayson out of his cage.