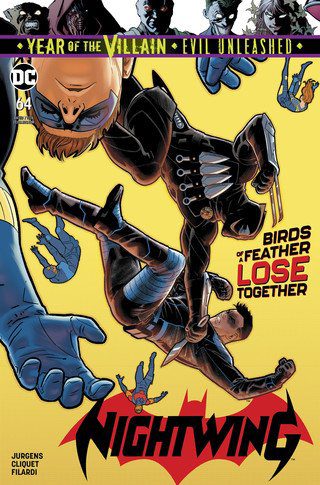 Nightwing #64 is definitely one of the better issues in the Ric Grayson run. Probably Dan Jurgens’ best issue in his time writing the story.

From start to finish, it’s impossible to anticipate what will happen next in Nightwing #64. There’s a decent amount of action, along with some suspense.

Something about Ric’s internal monologue felt right this issue, too. There’s still a bit more summary than I’d care for. There were a couple instances where he seemed more believable.

(Warning: Spoilers for Nightwing #64 ahead.)

This first few pages of Nightwing #64 are the best of the issue. That’s not to say the story goes downhill from there. They just set the tone for what’s to come.

It’s no surprise Talon knew Bea’s name and everything, but I did not expect he’d wind up saving her life. Although, her dying at this stage doesn’t help him.

Ric’s acrobatics were on full display this issue. Ronan Cliquet’s work was particularly impressive in the moments where Ric was most desperate. Still not a big fan of his new outfit.

The part of the issue I found most bizarre was Colleen Edwards flipping out on Alphonse Sapienza. I get that her brother, Zak, is in a terrible spot and has taken more abuse than any of the other Nightwings combined, so she’s scared and grieving. But she’s been as gung-ho about this venture as anyone. And Zak even expressed his concerns directly to her!

She expressed how she’s supposed to take care of Zak because he’s her younger brother. Maybe the combination of that belief and the fact she essentially ignored his warnings are what led to this outburst.