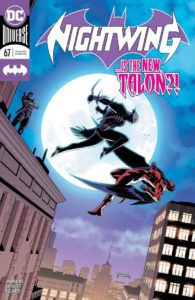 (WARNING: Spoilers for Nightwing #67 ahead.)

It really is amazing how the ending impact’s one’s opinion of a story.

About 99% of Nightwing #67 was awesome. Seriously, one of, if not the best issue in the Ric Grayson run. The action was great. Ric was really, really putting his old self behind him.

Dan Jurgens had me thinking Ric might actually take out at least one of the Nightwings.

Then, on the final page, he tainted it all.

Now, I’m sure I’m not the only one who thought Ric would eventually overcome Talon and the Court of Owls’ mind game. It’s how things work, I get it.

Did it have to happen that fast, though? Over a fight with Condor Red? Yeah, he’s got a cool look, but he’s irrelevant. (OK, he has a very cool look, though I’m not sure on the name yet — that’s all beside the point!)

But because Condor Red said the word “family” or whatever, he set Ric straight. Nothing and no one else could. It had to be that word — which, apparently, no one has uttered since Ric was shot in the head.

It was still a solid issue, but Jurgens has a bit of a mess to clean up.

And one last little item, I appreciate the way Jurgens summed up what happened in the previous issue. He didn’t was two pages, or even one. It took one speech bubble from Talon to remind us of what happened. Plus, it flowed naturally with what was going on in the issue. A nice touch and an excellent decision by Jurgens.