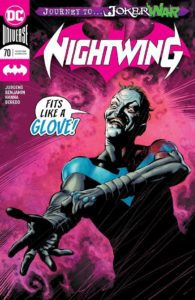 (WARNING: Spoilers for Nightwing #70 ahead.)

The combination of Ryan Benjamin and Scott Hanna on pencils and inks, respectively, is a great change from Ronan Cliquet. Specifically because Ric Grayson is going through another odd phase. He still has his memories from his days as Nightwing and Dick Grayson, but Dr. Haas messed Ric up pretty good in Nightwing #69.

Actually, last issue, Dan Jurgens made it seem like the memories of Dick Grayson had successfully been suppressed again and Ric was going to take full control. But Ric even said it himself throughout Nightwing #70 — both sets of memories are jockeying for position in his mind.

And it’s great the new Nightwings have an idea of what’s going on with Ric, even though he could have to answer to one of them, Colleen Edwards, down the line. Their increased knowledge of the man they know simply as “the cabbie” will make for a much better story than whatever upcoming battle with the Joker Jurgens has lined up.

Because, we can take a good guess at what will happen with the Joker. As for the four Nightwings, we have no idea how Ric’s interactions with them will go. That’s not to say the Joker is predictable — obviously, he’s not. But Jurgens could go in any direction with the Nightwings. We don’t know much about their history outside of their professions, so anything can happen. Hopefully, Jurgens lets one or two of them go rogue – the Edwards siblings being the best candidates.