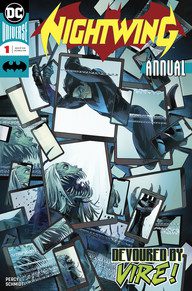 For all the weird things happening in comic books, and there quite a few of them in Nightwing Annual #1, I find it so strange when characters like Nightwing or Robin, who have these tiny masks, put themselves in bright settings.

It’s even stranger when they’re surrounded by a number of people like Nightwing was at Gotham Four News Headquarters – a place filled with at least 50 journalists. There are just too many curious eyeballs there. Someone would figure out who Nightwing really is.

Doesn’t matter who he’s helping, there’s always that one person who doesn’t have any feel for the situation.

But Benjamin Percy doesn’t get into that past a few comments from Nightwing and Vicki Vale, his focus is on the much larger issue. Percy uses Nightwing, Gotham Four News and FEED to address what’s going on with the media in real-life America while furthering the Dark Web story.

I understand the importance of journalism is a topic that needs to be addressed, but what I care about more is the importance of technology in all this. Unfortunately, I think the latter is overshadowed by Percy’s primary focus on the media, the harassment journalists deal with and how corrupt news can impact society.

This Dark Web has a mind of its own and is capable of things technology shouldn’t be able to do. If there’s an individual or a group controlling them, that’s scary, but if they’re operating on their own…well, Nightwing and Batgirl may need a little help in this fight.

Speaking of the lovely couple, we’re once again reminded how they’re the right fit for one another. Doesn’t matter what’s happened in the past Nightwing and Batgirl should just tie the knot already. Lord knows all the other heroes getting married (or at least trying to) haven’t had fairytale relationships at the start. It’s impossible to have a perfect relationship, to begin with, never mind as a costume-wearing vigilante.

Also, I don’t care about the talk they had in Batgirl #25. These two make as much sense together as anyone else.

Someone, please make the move.