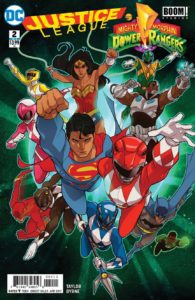 Last month Boom Studios and DC kicked off a crossover with the Justice League and The Mighty Morphin Power Rangers. Tom Taylor, of DC’s Injustice: Gods Among Us series, is writing this crossover event and the review of the first issue last month was optimistic. Unfortunately, while issue #2 contains a lot of fun fan service it does little to move the plot or create a reason for readers to invest in these characters. Taylor’s pace with the Injustice series was quick and readers were treated to frequent unexpected twists. Here readers are provided an opportunity for action figures to play together as the battle between heroic teams provides each character a chance to display their patented character trait or imagery.

Taylor’s work on Injustice assumed that readers knew the history of the characters filling the panels and that allowed him to tweak expectations to create an engaging narrative. Here Taylor again rightly assumes readers understand the history and characters in the crossover, but then uses cliches rather than twisted expectations. Heroes misunderstand each other and fight. Villains team up. All straight out of franchise cross over story templates. Yes, the Black Ranger does get some solid one liners about Batman’s attitude, but that is the lone moment of character interaction that doesn’t feel rote. 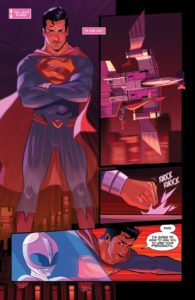 Stephen Byrne’s art is a mix blessing. The character designs on the Justice League heroes and villains feel off from the current iteration of these characters. The costumes are accurate, but the body shapes and faces are more stylized. It is possible that the human faces of the Justice League awkwardly contrast with the stoic masks of the Power Rangers. Fortunately, the rest of the visual tone feels straight out of an after school cartoon. Byrne, may be the colorist, since none is credited, and his bright and vivid colors pop like cells of animation. The shadows and lighting add a storybook like quality to the panels.

The colors of Stephen Byrne beautifully animate this world, even though the DC character designs take some getting used to. While there is room in this 6 issue run for Tom Taylor to twist expectations and create an engaging story of these fan favorite teams, the story set up thus far is as static as any iteration of a predictable episode from Saban’s long running series.