No One Left To Fight #1 REVIEW 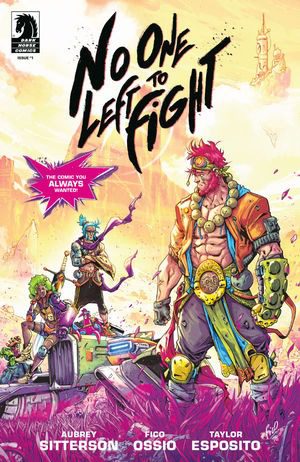 No One Left To Fight #1
Dark Horse Comics

No One Left To Fight #1 may be filled with bubble gum and cotton candy coloring, but this story is far from light-hearted. The first chapter in Aubrey Sitterson’s story introduces to the main character, Vâle. We also meet his friends, Krysta and Timór, as well as Fargan VI, who appears to be more of a tertiary character versus the other two.

In addition to giving us some new, kick-ass looking characters drawn by Fico Ossio, it seems Sitterson’s story is addressing two larger issues.

There’s the more obvious commentary on being stuck in the past. Although soldiers post-service typically seem to have trouble looking toward the future, it seems the past is what’s most relevant for some of these characters in No One Left To Fight #1.

Furthermore, Sitterson is poking at humanity’s tendency to be jealous, which also goes along with the other major theme in No One Left to Fight #1. Even if it’s warranted at times, people can easily let their insecurities get the better of them. And they always want what others cannot have, regardless of their current quality of life.

There are other things at play in No One Left to Fight #1 — including some sweet action — the will bring you back for more in the next issue of this promising series.