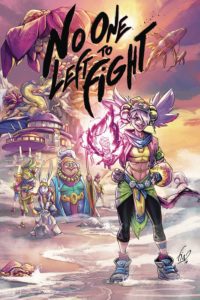 No One Left To Fight #2
Dark Horse Comics

The long-standing rivalry between Vâle and Timór seems to have more behind it than initially thought. It doesn’t even seem like they were ever really friends, to be honest. As much as he doesn’t seem to hate Timór, I can’t imagine Vâle would be bothered if he was completely wiped from the picture so he could be with Krysta. Which is why you can’t really blame Timór for despising Vâle. Though it appears there are additional reasons for Timór to hate their world’s savior. (More in the spoilers.)

We’re introduced to two new characters in this issue: Winda and Mistress Harga. Both have something to offer and can help further the tensions between Vâle and Timór, or maybe one can ease things a bit.

No One Left To Fight #2 maintained the story’s even rhythm, though offered some intense moments. Aubrey Sitterson’s dialogue, especially Vâle and Timór’s, feels so real. And their emotion behind each statement really jumps off the page thanks to Fico Ossio’s outstanding artwork. The definition on each of the four hero-type characters — Vâle, Timór, Krysta and Winda — serves as a constant reminder any of these four could kick almost anyone’s ass at any given time.

(Spoilers ahead for No One Left To Fight #2.)

As much as Sitterson is making it more about Winda and Vâle right now, I am dying for the Winda v. Krysta battle. Winda was so icy when she showed up. Damn! Need to see those two throw hands.

Going back to Vâle v. Timór, it looks like Timór is more punk than badass. It doesn’t look like he has an edge. It’s more that he’s a whiney brat. Tough there could e something more there. Hopefully Sitterson gets into that somewhere down the line.

Lastly, I feel for Winda. I respect how she’s put herself out there, but it’s never going to be what she wants it to be. Vâle isn’t a bad dude, but he just can’t seem to move on from Krysta. If he hasn’t gotten over her by now, it probably won’t ever to happen.

comics Dark Horse Comics No One Left To Fight