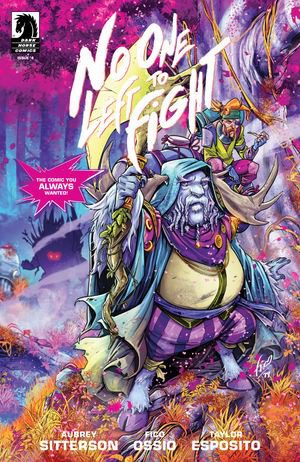 No One Left To Fight #4
Dark Horse Comics

Now four issues into the No One Left To Fight story, Aubrey Sitterson is forcing readers to take sides. If you haven’t chosen between the two main male characters, Vale and Timor, what are you doing?

These have one pretty big reason to dislike one another, and regardless of what’s going on around them, it’s always there. Every step of the way.

There are a few other things in store for Vale and his friends, but the tension between him and Timor isn’t going anywhere.

(Warning: Contains spoilers for No One Left To Fight #4)

Vale may be the main character of the story, but how can anyone not side with Timor at this point? I get it, Timor is far from perfect. He’s a bit insecure. He has a temper. He didn’t get along with his teacher.

But can you blame the guy? Look who he’s constantly being measured up against.

And if that’s not bad enough, Vale wants the one thing Timor has.

Sorry, I don’t care what Vale says, that’s not a friend.

Hopefully Timor’s insecurities don’t drive Krysta away. I don’t that will at this stage. Even if that did happen, I don’t think she’d leave Timor for Vale. Krysta has made it pretty clear she’s done with him in that sense.

Rightfully so. He’s disrespecting her throughout this, as well. After all, she’s married, too.

And while this is all going on, The Hierophant has started something big.