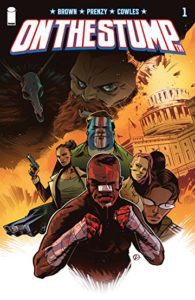 Sports like football, UFC and boxing have been widely criticized in recent years for its physical violence and message that it sends to viewers for the validity of said violence. However, politics is often as dirty and confrontational as these sports behind the scenes yet goes under a different sort of scrutiny.

On The Stump explores a world where the world of dirty politics and violent sport collide and the brutality of battling ideologies quite literally collide with one another. In this world, senators battle out in a fighting ring known as the stump to pass legislation with the winner of brutal fistfights passing the bills they support.

The story follows Senator Jack Hammer as he becomes entangled in an investigation of Senator Thunder Bearer (yes, really) and his attempt to pass legalized murder on The Stump. What follows is a conspiracy that mixes in a sports drama with a political thriller, clearly a point of emphasis for the writers of On The Stump.

The blending of genres allows for a freshly told original story that uses familiar beats including fixed fighting matches, dirty politicians ordering murder to ensure cover-ups and wisecracking henchmen willing to do the dirty work. Despite what some would say are clichés, the setting of On The Stump allows them to be used in a new and interesting way. 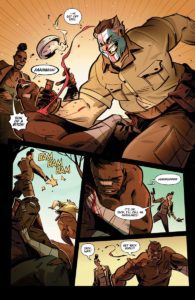 The issue also touches on prevalent issues surrounding politics today including politicians’ relationship with the press and just how toxic it can become. It also has subtle lines attributed to the effect lobbying can have in politics, even in this ultraviolent world that I hope they will touch on later on.

Overall, On The Stump #1 does an excellent job of establishing its world early on in terms of relaying how it works to the reader in just a few pages. Its ability to nail its tone and mission so early on in the run is also a promising sign for the future of this series. The only point of criticism for its first issue is the artwork of the action scenes. While the brutality is conveyed effectively, the specifics of who is doing the punching and what exactly is happening can easily be loss. Perhaps this is on purpose to give the sense of chaotic fighting the characters experience but that is still to be seen or really driven home well.

Chuck Brown Image On the Stump Prenzy
Add your voice!Join the conversation on Discord...
Join Our Discord