Every year, there tends to be one or two anime that define that year in retrospect. In 2013, it was Attack on Titan.  In 2014, it was Tokyo Ghoul, and in 2015, that show was none other than One Punch Man.  That’s not to say 2015 wasn’t a competitive year, and that’s what makes OPM that much more special.  I don’t say this lightly as 2015 reintroduced another beloved series; Dragonball Super.  Other notable series included Mobile Suit Gundam: Iron-blooded Orphans, and I’ll toss in Is it Wrong to Pick Up Girls in a Dungeon for the sake of diversity.

These shows demanded popularity, but One Punch Man was the breakaway hit, especially among casual and first-time viewers.  It’s not a show that demands popularity, it simply is. One Punch Man is fun, the action is incredible, and the humor is dry, subtle, and outrageous when it needs to be. It’s perfect.

The fandom for One Punch Man was about as serious as a Serious Series; Serious Punch gets.  So imagine how serious I got when when the One Punch Man Season 1 Box Set arrived at my doorstep. It was pretty serious. For the sake of full disclosure, I am a One Punch Man fanboy.  I imported the Oppai hoodie from Japan.  I have a matching Oppai baseball cap courtesy of Arsenic x Cyanide. As a fellow baldy with an egg-shaped head, I can relate to Saitama’s struggle. Being bald ain’t easy. 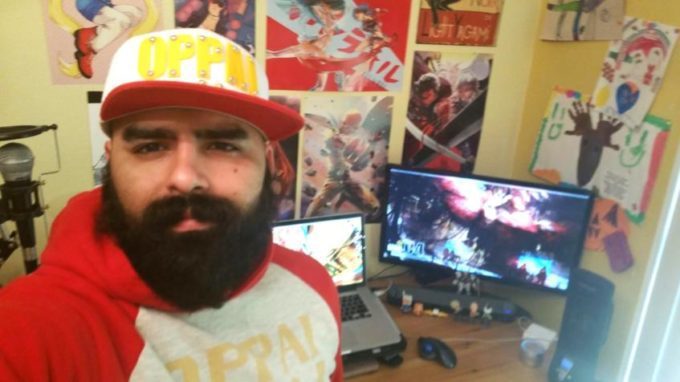 That’s part of what makes One Punch Man so special for many people, even if they don’t realize it. One Punch Man creator, ONE, even stated, “The world is full of cool looking heroes, so I didn’t think that was something I wanted to write about. Plus, I believe that heroes coolness comes from their spirit and not their looks. I don’t think how a hero looks is that important.” It’s the normality of an overpowered hero that resonates within us.  For me at least, I think that’s what makes One Punch Man so fun and relatable. Even an egg-headed baldy like me can do great things on a small scale, just for fun. 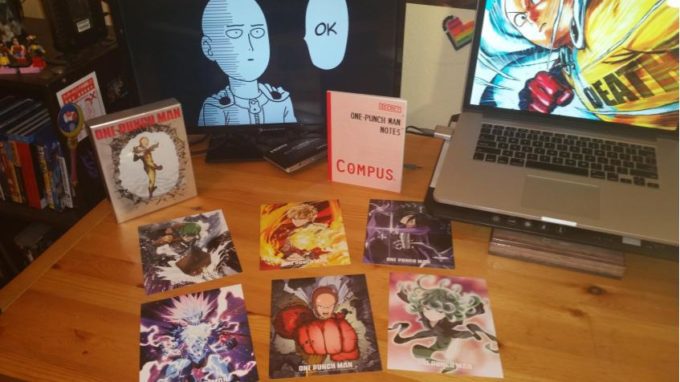 If you’re as big a fan of the series as myself, you’ll find the One Punch man Limited Edition box set packed with goodies and features. The double protected box set comes with two blu-ray discs and two dvd’s, complimented by a reversible case wrap. It also comes with a notebook filled from end to end with character stats, interviews with ONE and illustrator Yusuke Murata, among many others.   They provide a great amount of depth on the different processes between the web comic, the manga, and the anime.  I don’t think I’ve ever seen a box set compiled together with so much love. For the price, it almost feels like a bargain.

I’m downplaying the notebook though. It’s like reading info right off the wiki pages, if that’s your thing. I’m betting it is. It’s compact, and great if you’re bored on a long trip and trying to salvage your phone’s battery life. However, once you get to the end of all this cool info, you’re directed to close the book and open it from the back end.  From there, you can enjoy the first issue of One Punch Man over and over again! That was the coolest surprise for me.  I already have a few volumes, but seeing the first issue just sweetened the deal that much more. That’s fan service at its purest. 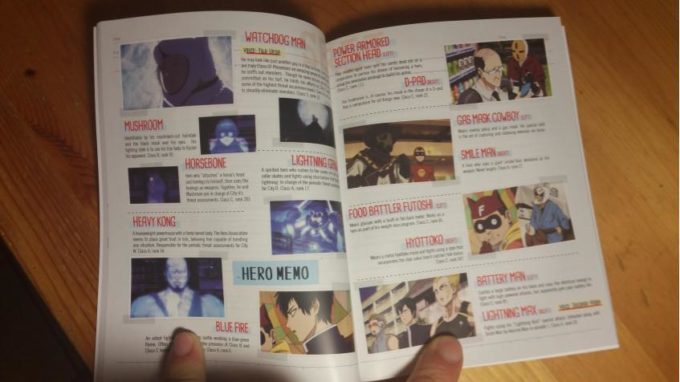 The front of the box cover has an opening so you can see the jewel case box art.  If you change up the case wrap, you can alter the look of the box cover. I did and I prefer it. The box set also comes with not 1, not 2, but 6 changeable card stocks so you can put your favorite hero on the front cover.  You can keep it original with a Saitama cover, or change it up with Genos, Mumen Rider, Speed of Sound Sonic, Tatsumaki, or Lord Boros. The glossy finish compliments the detailed art and adds to the box set’s level of quality.

When you open the jewel case, it’s pretty easy to tell the difference between the Blu-Ray and DVD’s.  Both have the same Saitama and Genos art for discs 1 and 2.  However, while the Blu-Ray discs tout the full color promo pics of our favorite heroes, the DVD’s come in basic red and blue line art.  While I love me some full color images, I’m a sucker for line art, especially conceptual line art in its unfinished stages.  As an added bonus, there’s also a small coupon on the inside that gets you $5 off a year subscription to Jump.

Now when it comes to buying movies and shows on disc, features aren’t usually a big deal for me unless they’re significant.  I’m talking Kevin Smith doing Roadhouse commentary significant.  And no, Kevin Smith isn’t doing commentary on One Punch Man, but how cool would that be?  There are, however, some very significant features in this package.  Mainly I’m talking about the inclusion of OVA’s, and One Punch Man has 6 of them. Sadly you can’t come by them easily on free - legal - viewing platforms. So when I popped in that Blu-Ray for the first time, I jumped when I saw their inclusion. These don’t just feel like filler though. These stories come straight from the manga.

Have you seen this:
Kingdoms of Amalur Re-Reckoning (PC) Review 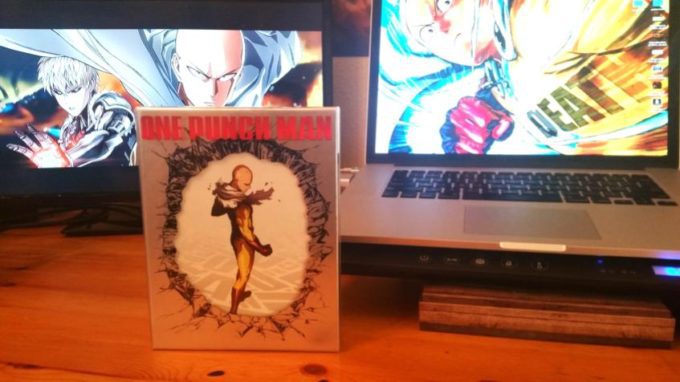 If you haven’t seen One Punch Man yet, do so and then buy this collection. You can find it anywhere; try Netflix, Hulu, or Daisuke. If you have seen it, you most likely have only seen it subtitled. Well, good news for dub fans as this box set releases with a full English casting. Purists will be happy to find subtitles still intact. I won’t lie, the English cast had massive shoes to fill. I understand very little Japanese, but the Japanese v/o’s were aesthetically pleasing and fit their character’s personalities well. Genos and Saitama’s English v/o’s can be hit or miss, and some of the lines weren’t delivered as crisp as I’d like to think their Japanese counterparts were. I would chalk that up to some of the English rewrites. I have one specific gripe on that matter, but you can read it in the score down below.

For the price tag, the One Punch Man Season 1 Limited Edition Box Set comes loaded with so many goodies and features. Between the booklet, card stock, OVA’s and interviews, dare I say there’s too much to love. You can see the thought and love put into the outer features. The premiere of the English voice cast, despite some getting used to, does not disappoint. Many English v/o’s tend to come off as tone deaf compared to their Japanese counterparts, but not here. The English cast does an incredible job in keeping pace with the tone and characterization of our heroes and villains. Sometimes, it can be tiresome to read subtitles, and on my 11th viewing of this series, it was nice to sit back and simply enjoy the animation. This box set is like a set of armor sealing in immeasurable, irresistible features, so break it open and enjoy.